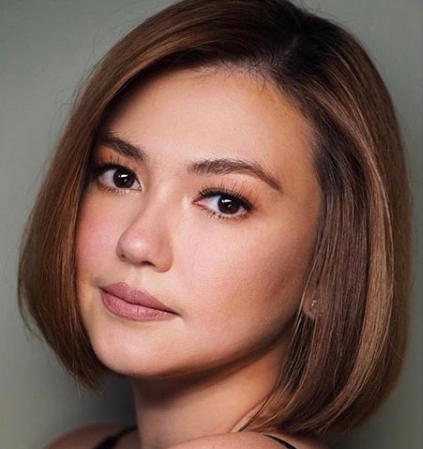 Angelica Panganiban had a calm response when some netizens were found talking about her and her past relationships.

A screenshot of a group chat conversation was recently shared online by a certain Kate (@atienza_kate) on Instagram. The said account has been set to private, but the screenshot was posted by FashionPulis blog today, March 10.

In the conversation, netizens were discussing about the guys that have supposedly gone through Panganiban, such as ex-boyfriends actors Derek Ramsey and John Lloyd Cruz; the naysayers referred to her as already “laspag” (used up).

(Because of the many men who have gone through Angelica, her body is already used up.)

Another, a certain Margaux, said only three were known to have been with Panganiban in the past, ex-boyfriend Carlo Aquino included.

(In fairness, there’s been only three, as far as everyone knows, but it still can gravely wear one out. Especially JLC LOL. Or Derek? Both, because it’s them who lived in with her.)

Kate, the one who uploaded the screenshot, hinted that the women in the group chat may be fans of Aquino: “Kayo [na] ang manghusga sa mga yan #angelicapanganiban #carloaquino grabe ang mga #carloholix.”

(You be the judge of these. These [Carlo Aquino] fans are too much.)

Meanwhile, Panganiban took to her Instagram Stories yesterday, March 9, where she addressed the group chat.

(Dear Margaux, you know who you are. And you know the things you said.) 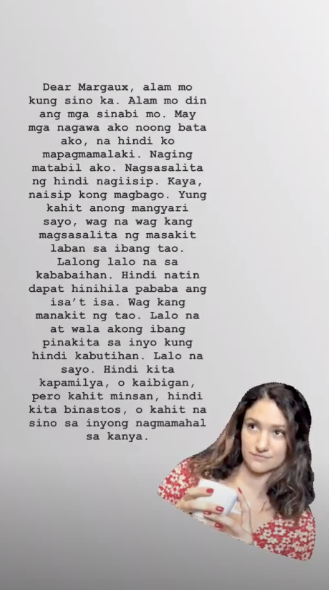 (I have done things when I was still young that I am not proud of. I have been arrogant. I talk without thinking. So I thought of changing. [I learned that] no matter what, you should not say hurtful things against other people, especially against other women.)

Panganiban also told the netizen that women should not pull other women down. This month of March is notably Women’s History Month.

(We should not be pulling each other down. Do not hurt others. All the more because I have shown you all nothing but kindness. Especially you. You are neither my family nor friend but I never treated you rudely.)

She later on shared another Instagram Story, this time a quote that said, “Never apologize for being a powerful f*cking woman,” tagging Hollywood actor Channing Tatum in the process.

Panganiban and Aquino were together for six years before breaking up. Panganiban revealed during a “Gandang Gabi Vice” guesting with Aquino last September 2018 that the reason behind their parting was a third party, actress Maja Salvador. Aquino, however, said he broke up with Panganiban first before he pursued Salvador.

Meanwhile, Salvador broke her silence and denied she was a third party in Panganiban and Aquino’s relationship during a guesting on “Magandang Buhay” last October. Cody Cepeda/JB