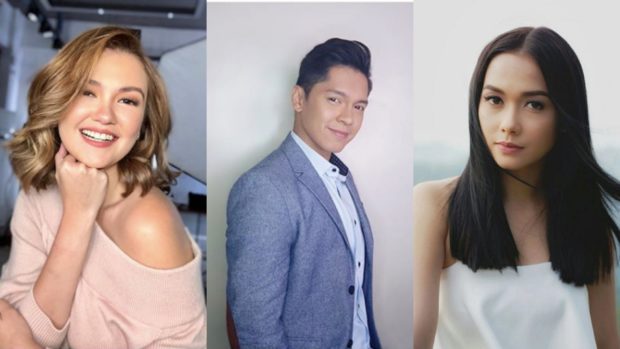 Why did Carlo Aquino and Angelica Panganiban’s relationship fizzle out not once, but twice? It turns out that this was over a third party.

This was the actress’ revelation when she and Aquino had a joint guesting in a “Gandang Gabi Vice” interview aired Sunday.

Host Vice Ganda asked why their relationship ended the first time—after being together for six years. “May third party (There was a third party),” Panganiban pointed out.

“May boyfriend kang iba (You had another boyfriend)?” Vice asked, which Panganiban denied. This led the comedian to declare at Aquino: “So may girlfriend ka (So you had another girlfriend),” and the actor only chuckled.

Vice shifted to Panganiban and Aquino’s second try, which she said lasted for more than a year. When asked why it did not work out again, Panganiban answered, “Third party ulit (It’s third party again).”

The actress then left clues due to the host’s persistent questions, such as the actress being an ABS-CBN talent and regularly featured in the Sunday noontime variety show “ASAP.”

Vice was not done and figured to find out the first letter of the mystery girl’s name that starts with “M.” After having fun with his questions, the host finally got it right when he mentioned “Maja”—referring to actress Maja Salvador.

Although Aquino did cheat on Panganiban with Salvador, she clarified that it was “legal,” meaning he ended things with her to be with Salvador. “Pinutol niya yung sa’kin bago siya nagsimula (He broke up his relationship with me so he could start again),”  Panganiban said.

“Na-in love ka kay Maja (You fell in love with Maja),” Vice said, to which Aquino agreed. When he asked the actor “Alam ni Maja mag-jowa kayo [ni Angelica] o nilihim mo (Did she know you were with Angelica or you kept it from her) ?” Aquino replied: “Parang hindi (I think not).”

But did Panganiban have bitter feelings against Salvador after what happened? “Hindi naman, hindi kami nagkaroon ng problema (No, we didn’t have a problem),” she admitted. “Ako pa ba ‘te? Bata pa lang, brainy na ‘to (You’re asking me? I was already brainy from way back when I was young).”  Katrina Hallare /ra

WATCH: Angelica Panganiban is ready to be ‘ninang’ of ex-BF’s baby