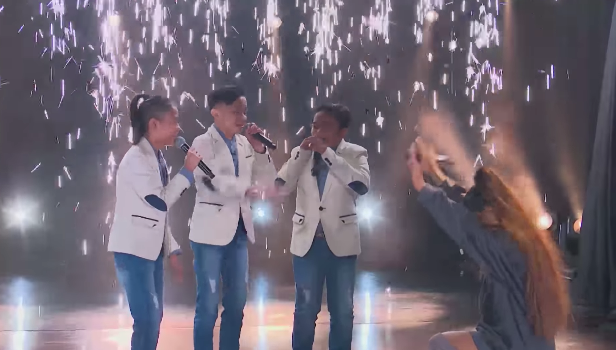 The TNT Boys—Francis Concepcion, Mackie Empuerto and Keifer Sanchez—are up to now still overwhelmed and speechless after they were surprised by Ariana Grande as she joined them during their performance on “The Late Late Show with James Corden” recently.

The three boys were interviewed on “Magandang Buhay” on Feb. 24 by hosts Jolina Magdangal, Melai Cantiveros and Karla Estrada, who asked them about what they felt upon meeting the American pop star.

Kiefer and Francis were both sick at the time of their performance, but they still delivered a showstopping rendition of  “And I Am Telling You I Am Not Going,” which saw Grande on her knees, bowing.

Mackie, on the other hand, said he was controlling his tears because he might not be able to sing.

Grande, meanwhile, only had praises for the boys’ stunning performance.

“I’m so obsessed with you guys,” she told the TNT Boys then, which saw Francis on the verge of tears and slapping himself. “You guys are so incredible, that was so beautiful.”

“Is this a dream or not?” Francis then asked, turning to Corden.

Estrada, on her end, gave advice to the boys, saying they could be one of the best boy bands if they continue to follow their coach.

Apart from their performance on “The Late Late Show with James Corden,” the TNT boys shared that they guested on Radio Disney and Extra. They also kept their fans and admirers on their toes by saying they have a world tour this 2019, as well as a new single coming out.

The TNT Boys’ performance on “The Late Late Show with James Corden” may be viewed below.  /ra