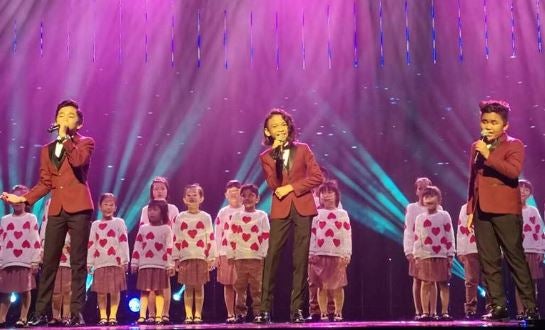 The TNT Boys–Francis Concepcion, Mackie Empuerto and Keifer Sanchez–were the object of admiration by many when they captured the hearts of their audience that included Singaporean President Halimah Yacob during their performance at the 2018 President’s Star Charity (PSC) event in Singapore over the weekend.

The three dapper young boys emerged on stage last Oct. 14 wearing matching maroon suits and treated the attendees of the charity ball to their rendition of Whitney Houston’s “The Greatest Love of All” and Beyoncé’s “Listen.” Their performance was shared on YouTube by TNT Boys LoveBAR via Jia Chen, a sight that truly rendered one speechless for its sheer wonder and talent.

Unassuming and humble the boys may look, the audience was captivated from start to finish as the trio did what they knew best: to sing, and sing impeccably.

It wasn’t surprising, then, that after their breathtaking performance, President Yacob herself went backstage to personally meet and take pictures with the boys.

The meeting was shared on TNT Boys’ official Facebook page last Oct. 14, and showed the boys bowing and greeting President Yacob, who looked excited as she asked for a picture with the three. It was all smiles for the boys and President Yacob as they posed together, a moment now captured forever in photo.

This isn’t the first time the young boys earned the admiration and praise of notable figures. Last September, pop singer Jessie J found herself in awe of the TNT Boys after seeing their cover of “Bang Bang,” admitting at one point that she  was obsessed with them.

Things continue to look up for the TNT Boys, as they are set to hold their concert, “TNT BOYS LISTEN: The Big Shot Concert,” this Nov. 30. The concert will be held at the Araneta Coliseum in Cubao and is a major feat among the trio’s countless other glimmering accolades, and the rest that would still follow.

Who wouldn’t be so enamored by the TNT Boys? Congratulations, Francis, Mackie and Keifer!  /ra