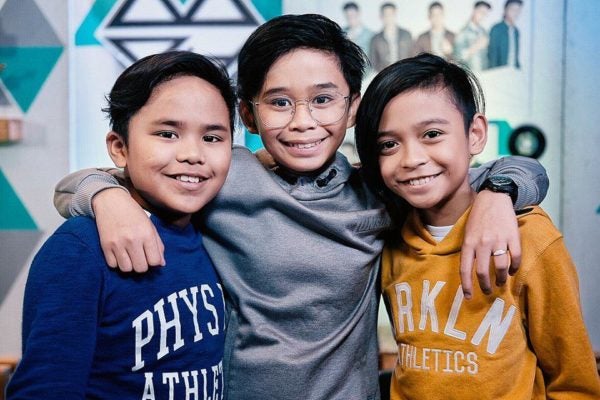 The TNT Boys — Francis Concepcion, Mackie Empuerto and Keifer Sanchez — performed at the Philippine Basketball Association’s opening ceremonies in Philippine Arena on Sunday, Jan. 13. The boys sang the Philippine anthem “Lupang Hinirang” and “Sino Ako” for the invocation, performances that have drawn mixed reviews from netizens.

Their performance of “Lupang Hinirang” was shared on YouTube by a netizen Nadine M. Paner on Jan. 13, while the PBA’s Twitter account shared a 10-second clip of their rendition of “Sino Ako”. In the first video, the trio can be heard singing the national anthem seemingly nervous, but delivered nonetheless by finish the song.

(What happened to TNT Boys? Don’t they know what they are singing? Or are they nervous?)

One Albert John (@pucherrific), on the other hand, observed that the boys had a hard time bringing “Sino Ako” to a close.

“TNT Boys had a hard time finishing smoothly the invocation song,” he wrote. “Anyare.” (What happened?)

Another, a certain Kriz, said the boys were “nagkalat” and did not know the lyrics of “Sino Ako”. XXXX

(What are the TNT Boys doing in the PBA Opening? They wanted to upstage each other in Lupang Hinirang, then they messed up “Sino Ako” as if they do not know the lyrics.)

But while others criticized the TNT Boys’ performance, there were those who also praised them.

“Good unison on the first half; melody audible on ‘Lupa ng araw’ part,” she said. “Despite the three-part harmonies, hindi pa rin kumawala sa (they did not do away with the) original structure, as opposed to the mistakes done in the past (e.g., slower tempo).”

Another, Jho, shared that one mistake cannot erase the pride the boys have brought to the nation.

“That single mistake can’t erase the fact that these boys bring so much pride to our country,” wrote one Jho de Guzman (@JhoDguzman). “Love you boys. #TNTBoys.”

A certain NL also wrote that people often forget that the boys are minors and are vulnerable every time they perform on stage.

“People forget that [you’re] just kids & every time [you] step on stage, [you] put yourselves in a vulnerable position ready to be attacked by bashers eagerly waiting for a mistake,” the netizen said. “The important thing is [you] learn from this. There’s nowhere to go but up! Proud of [you] always! Love you! #TNTBoys.”

The boys, from their end, have since acknowledged the comments regarding their performance yesterday. They stated in a Twitter post that they practiced for the opening ceremonies, but performed what they were requested of for the invocation at the last minute.

“Hey it’s okay friends! We practiced for this event,” they wrote. “But we did what we were asked for the
invocation last minute.”

Hey it’s okay friends! We practiced for this event. But we did what we were asked for the invocation last minute. We’re reading all your suggestions and we’ll be better next time! Much love 🥰🥰🥰

They added that they are going through the feedback and considering all these for their next performance: “We’re reading all [of] your suggestions and we’ll be better next time! Much love.” JB

Health workers from other regions eyed as ‘substitute’ for NCR frontliners