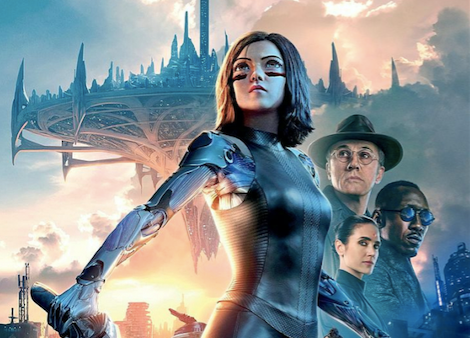 Chinese movie “The Wandering Earth” slips from the top spot to third place at the global box office this week, making way for James Cameron-produced “Alita: Battle Angel” to take the lead, grossing over $104 million, and for “How To Train Your Dragon: The Hidden World” to move up to second, grossing $90.2 million.

“Alita”, written and produced by James Cameron and based on the “Gunnm” manga, adds over the $104 million earnings to its total global grosses, which now stand at more than $263 million.

The science-fiction film knocked Chinese blockbuster “The Wandering Earth” off the number one spot after two consecutive weeks at the top. The movie, directed by Frant Gwo, drops to third place this week, grossing $36.7 million, taking its total to more than $684 million worldwide.

Between the two, the third installment in the “How To Train Your Dragon” series, which hit cinemas this past week in North America, moves up from sixth to second place at the global box office, grossing $90.2 million worldwide to add to a current total of over $274.9 million. “The Lego Movie 2: The Second Part” drops from third to fourth place this week, grossing $136 million worldwide.

Note that the freshly crowned Best Picture Oscar winner “Green Book” also features in this week’s global box office top 10. The drama, based on a true story, gains three places on last week, adding over $10 million to its total grosses.

Here is the global box-office top 10:

Read Next
Backstage at the Oscars: Sing-a-longs and Champagne for Gaga
EDITORS' PICK
‘A greener, cleaner tomorrow’: A how-to guide for Filipinos who want to help with today’s energy crisis
SM continues to send relief assistance to remote towns in Batangas
Get exciting deals and discounts when you download the new McDonald’s App
Bato to reapply for US visa if Duterte wants him to join US-Asean summit
US Navy helicopter crashes in PH sea; 5 crew members rescued
Batangas execs, Taal evacuees thank House; hopeful on rehab efforts
MOST READ
Taal’s sulfur dioxide emission increases
US Navy helicopter crashes in PH sea; 5 crew members rescued
Megan Young, Mikael Daez get married
No time for revelry; Tagaytay instead plans for alert level 5
Don't miss out on the latest news and information.