Backstage at the Oscars: Sing-a-longs and Champagne for Gaga 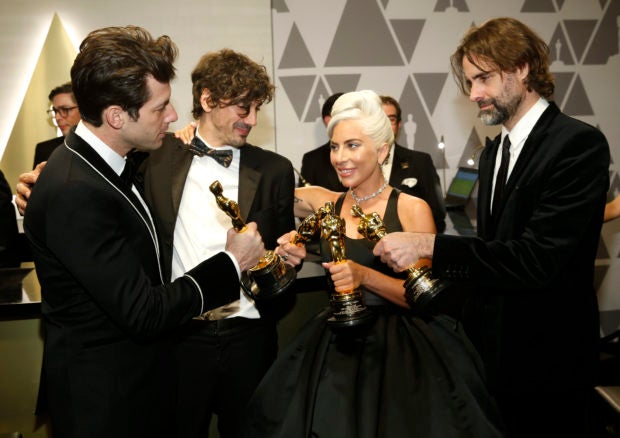 Mark Ronson, from left, Anthony Rossomando, Lady Gaga, and Andrew Wyatt, winners of the award for best original song for “Shallow” from “A Star Is Born”, attend the Governors Ball after the Oscars on Sunday, Feb. 24, 2019, at the Dolby Theatre in Los Angeles. Image: Invision/Eric Jamison via AP

Right off-stage from where the Oscars are handed out, there’s a whole mini-show happening in the wings with a cast of busy production people, anxious stars and dazed winners circulating in and out of the tight space.

The Associated Press got a front seat to the action, where “Aquaman” star Jason Momoa could be seen giving a bear hug to “Free Solo” director Jimmy Chin, Lady Gaga asked, “Did I nail it?” after her show-stopping “Shallow” performance and “Spider-Man: Into the Spider-Verse” producer Amy Pascal looked at her Oscar and proclaimed, “It’s so cute!”

Here are some highlights that didn’t make the broadcast of the 91st Academy Awards.

But where’s my drink?

Winners are often quite shell-shocked walking off the main stage of the Dolby Theatre and into the wings where they’re immediately photographed and asked to do a reaction video, but some quickly decide on what they want: A drink.

Lady Gaga, still wiping away tears from her emotional win for best song, came backstage and asked, “Is there champagne?” By the time she’d made it to the main hallway, a flute had found its way into her hands, but she hoped that photographers wouldn’t capture her downing it. Others had friends to help, and best actress winner Olivia Colman had two: Sam Rockwell and Frances McDormand.

“White wine for this woman, white wine,” McDormand said as soon as they got off-stage.

Rockwell chimed in: “She needs a white wine.”

And sometimes, you don’t even need to have won to get one. Sarah Paulson told her co-presenter Paul Rudd they were going to get cocktails — after they’d finished their job of course.

Chris Evans had moments with more than a few people backstage as one of the early presenters, many of which came in line for the restroom of all places. One such encounter was when comic book imprint rival Jason Momoa, aka DC’s “Aquaman”, came backstage. “Captain America” kept things civil as the two exchanged “hey mans.” Later, a woman came through saying, “I have somebody who needs to be in the theater” who hoped to skip the line. That somebody was best supporting actress nominee Rachel Weisz. “Oh, just somebody,” Evans joked, while letting Weisz cut to the front of the line. Steve Rogers would be proud.

Everyone who’s anyone had a comfortable option

The Oscars can be a long night for women in uncomfortable footwear, so Jennifer Hudson and Bette Midler came prepared. Hudson, who performed the nominated song “I’ll Fight”, wore slippers with royal blue feathers before putting on her lacy high heels for her moment on stage. And Midler had on a pair of black boots and socks, as well as a corduroy jacket, that were switched out for a pair of metallic platforms to sing “Where the Lost Things Go”. But there was one woman who stayed in the comfy footwear all night: last year’s best actress winner Frances McDormand rocked a pair of bright yellow Birkenstock sandals.

Sure, everyone who tuned in for the Oscars probably caught the opening number at the very least, but right off-stage, Amy Poehler, Tina Fey and Maya Rudolph all had their own private sing-and-dance-along to the performance. They bobbed their heads along to “We Will Rock You”, but really got into it for “We Are the Champions”, before taking the stage to present the best supporting actress trophy to Regina King. Not even “Shallow” got such a karaoke reception — but perhaps it was because everyone, KiKi Layne included, was too rapt with Lady Gaga and Bradley Cooper’s performance.

Even the presenters were nervous

“I’m so nervous,” said Awkwafina as she made her way to stage to present the sound editing and mixing awards with John Mulaney.

Thankfully her bit was all about being nervous, so it wasn’t exactly a bad thing to actually be feeling that way. Others get ribbed. Guillermo del Toro laughed and greeted Allison Janney, who had just walked off stage, telling her, “You didn’t (expletive) it up!” And some treat themselves to a snack. Jennifer Lopez grabbed a small plate of cheese and crackers after presenting. “You deserve it,” said Evans.

Brie Larson seemed a little hesitant to join in on Spike Lee’s adapted screenplay win moment. She presented the award to him with Samuel L. Jackson, who Lee called to join in on a photo backstage. Larson demurred. “No, no, I’m in the back,” she said as Jackson tried to pull her up to the front of the photo with a beaming Lee, still clutching his speech in one hand and his Oscar in another.

“Major,” Larson said, as they all posed.

As they walked out, Larson gave co-writers David Rabinowitz and Charlie Wachtel a piece of advice about winning an Oscar.

“Enjoy the moment,” she said. “It won’t make sense for a long time.”

Larson won her best actress trophy for “Room” in 2016.

Amy Adams is a supportive co-star

Late into the show, Amy Adams dashed out of the green room, champagne in hand. Her husband Darren Le Gallo chased after her with her purse. “You forgot this,” he said. But Adams had more important things to think about, like where she was going to stash the champagne.

“I want to be back there for this,” she said. The best actor category was quickly approaching and her “Vice” co-star Christian Bale was a nominee. CC