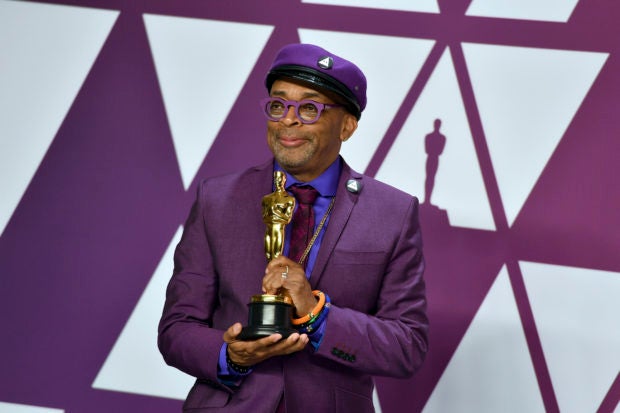 Spike Lee poses with the award for best adapted screenplay for “BlacKkKlansman” in the press room at the Oscars on Sunday, Feb. 24, 2019, at the Dolby Theatre in Los Angeles. Image: Invision/Jordan Strauss via AP

Spike Lee’s first-ever competitive Oscar award turned a mostly staid ceremony into one with joy and passion, but that later gave way to frustration.

Lee, who captured the best adapted screenplay trophy for “BlacKkKlansman”, jumped into the arms of presenter, longtime collaborator and close friend Samuel L. Jackson when he took the stage Sunday to accept his award with Charlie Wachtel, David Rabinowitz and Kevin Willmott. The audience gave him a standing ovation.

But Lee’s mood appeared to turn sharply when the trophy for best movie went to competitor “Green Book”. Seated in the audience, a visibly angry Lee waved his hands in disgust and appeared to try to walk out of the Dolby Theatre. He made his way back to his seat and later backstage to answer questions.

“This is my sixth glass, and you know why,” he said, smiling and holding a champagne flute aloft when he met with reporters. He briefly touched on his reaction to the “Green Book” win.

“I’m snake-bit. Every time someone’s driving somebody, I lose,” Lee said. He was drawing a parallel between “Green Book”, about the real-life Southern journey of a white man driving African-American pianist Don Shirley, and the 1989 best-picture Oscar winner “Driving Miss Daisy”, about a wealthy white woman and her black chauffeur.

“Green Book” has been lauded by its makers and cast as tribute to racial tolerance, but critics have condemned it as sentimental and outdated. “Do the Right Thing” was a best original screenplay nominee and not in direct competition with “Driving Miss Daisy”, noted Lee — who wore rings bearing the words “LOVE” and “HATE” on his left and right knuckles, recalling a key prop from “Do the Right Thing”.

The veteran filmmaker had waited a long time to be recognized by his peers in the movie industry beyond the honorary Oscar he received in 2016 for his contributions to movies, earning his first Oscar nod for his 1989 film.

On stage as he won his award, Lee was the epitome of excitement. After unleashing an expletive as he warned Oscar producers not to put a clock on his speech, Lee noted that his award came during Black History Month, and recited a litany of facts, among them the 400-year-old enslavement of Africans and transport to America. He also said his grandmother was a graduate of the predominately black Spelman College, despite her mother having been a slave.

“Before the world tonight, I give praise to our ancestors who helped build this country,” Lee said. “We all connect with our ancestors… when we love our humanity.”

He also waded into politics, citing the 2020 presidential election and calling on people to mobilize and “be on the right side of history. Make the moral choice between love versus hate.”

“Let’s do the right thing — you know I had to get that in there.” CC