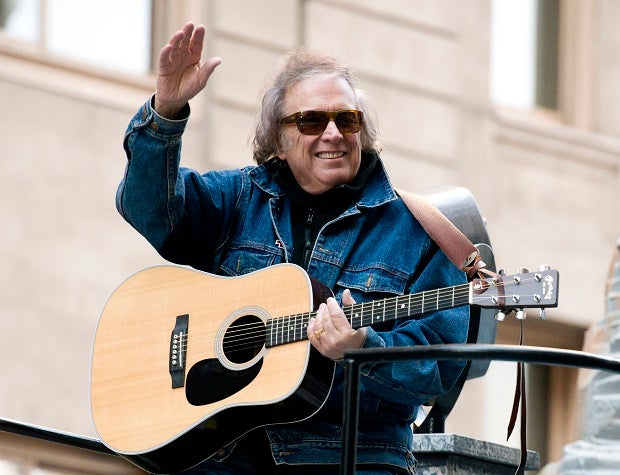 CAMDEN, Maine — Don McLean’s former wife has launched a photo exhibition about domestic abuse that includes a copy of the protection order issued against him, and the “American Pie” singer is threatening to sue a weekly newspaper that wrote about it.

Don and Patrisha McLean divorced after a domestic incident in their Camden, Maine, home in 2016. McLean pleaded guilty to domestic violence assault, which was dismissed after he met the terms of a plea agreement.

He also paid a fine of a few thousand dollars after pleading guilty to three other charges: domestic violence criminal threatening, criminal restraint and criminal mischief. Those remain on his record.

Patrisha McLean is using her exhibit, “Finding Our Voices: Breaking the Silence of Domestic Abuse,” to draw attention to domestic violence by sharing victims’ stories. The Free Press of Rockland wrote about the exhibition at the Camden Public Library on Feb. 7.

The Press Herald reports that McLean’s attorney then threatened to sue The Free Press and accused Patrisha McLean of “vicious misstatements.” The Free Press removed the story online so lawyers could review it but later reposted it.

Patrisha McLean told The Associated Press that Don McLean’s threat of a lawsuit is “shocking to everybody, but not to me.” She said her exhibit is important for survivors because it’s about “domestic abuse that we kept silent about for decades, and sometimes decades ago.”

McLean’s attorney, Eric Morse of Rockland, did not return a call to The Associated Press seeking comment. MKH

Read Next
Documentary about 1939 Nazi rally in New York up for Oscar
EDITORS' PICK
SMDC’s Style Residences: A real estate investment that will always be on-trend
Start the year right with sustainable oral hygiene with SPLAT’s eco-friendly natural toothpastes
DILG presses local gov’ts: Restrict the unvaxxed folk
Drugstores as booster sites initially giving Sinovac, Astra
Health chief urges PAO head to get jabbed
Acer starts the year off strong with the Aspire Vero National Geographic Edition
MOST READ
Imelda Marcos trends on Twitter after octogenarian jailed for allegedly stealing mangoes
Mayor Vico counters vice mayor: ‘Did I say anything about his family?’
IATF places 4 provinces under Alert Level 4
SSS: Members on home quarantine due to COVID-19 can apply for sickness benefit
Don't miss out on the latest news and information.