Documentary about 1939 Nazi rally in New York up for Oscar 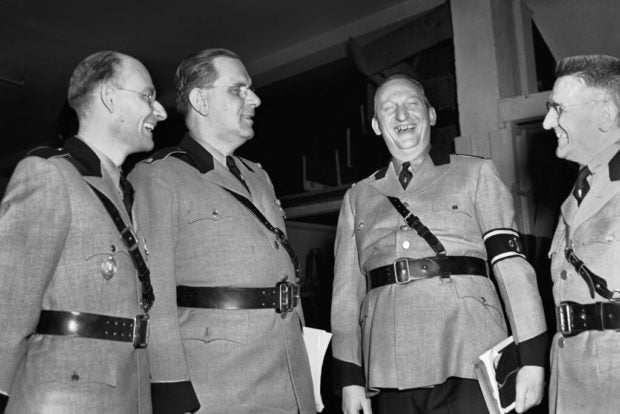 FILE – This Feb. 20, 1939 file photo shows Fritz Kuhn, second from left, national leader of the German-American Bund, and Gustave Elmer, third from left, national director of Organization for the Bund, join other uniformed Bundsmen in a last-minute discussion of the Bund rally, at New York’s Madison Square Garden. The pro-Hitler rally that took place 80 years ago this week at New York’s Madison Square Garden is the subject of a short documentary that’s up for an Oscar this Sunday, Feb. 24, 2019. The film directed by Marshall Curry is called “A Night at the Garden.” Image: AP Photo, File

NEW YORK — A crowd of 20,000 gives the Nazi salute while swastikas flank a giant portrait of George Washington.

Unimaginable to most Americans, the pro-Hitler rally that took place 80 years ago this week inside New York’s Madison Square Garden is the subject of a short documentary that’s up for an Oscar.

Documentary filmmaker Marshall Curry said that after learning about the 1939 Bund rally, which he could barely believe had happened, he asked a researcher friend to help him locate archival footage of the Feb. 20, 1939, event.

“Once he pulled it all together and I saw it, I thought it was very surreal and frightening, and I wanted to find a way to make something of it and share it with the world,” Curry said.

Curry sees parallels to 2019, when Republican President Donald Trump calls news organizations enemies of the people and anti-Jewish attacks are increasing. The anniversary of the rally comes as New York police report a 72 percent increase in hate crimes in the city over the past year, with anti-Semitic crimes making up almost two-thirds of the total of 55.

In “A Night at the Garden,” mounted police officers hold back protesters outside the Garden, about a mile north of the arena’s present-day location and where the marquee advertises “Pro American Rally” along with a New York Rangers hockey game the following night.

Inside, people in suits and dresses cheer as Kuhn calls for “gentile-controlled labor unions, free from Jewish Moscow-directed domination.” A protester rushes the stage and is tackled and beaten by uniformed Bund troops.

The protester, 26-year-old Isadore Greenbaum, was later arrested and charged with disorderly conduct. Details including his name and Kuhn’s are not spelled out in the documentary, which immerses the viewer in the rally rather than having a narrator explain it.

Curry said he considered using a narrator but “ultimately almost on a whim I edited it together as if it were a verite documentary where you dropped the audience into this rally and you had to figure out what was going on. I found that it was more compelling that way.”

Daniel Greene, a Northwestern University historian who curated an exhibit at the U.S. Holocaust Museum on Americans’ response to the Holocaust, said the Madison Square Garden rally was one of the most important events in the relatively short life of the German American Bund, which aimed to build support for a fascist America.

“You have about 20,000 people inside, and some people estimate that there were about 100,000 protesters on the street outside,” Greene said.

“A Night at the Garden” is one of five films in contention for best documentary, short subject, at Sunday’s Academy Awards ceremony. MKH