At the Oscars, songwriters are left in the dark | Inquirer Entertainment

At the Oscars, some songwriters are left in the dark 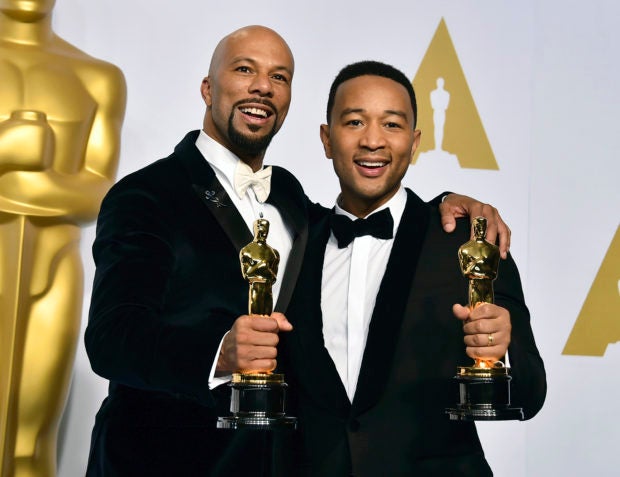 In this Feb. 22, 2015 file photo, Common, left, and John Legend pose in the press room with the award for best original song for “Glory” from the film, “Selma” at the Oscars in Los Angeles. Che “RhymeFest” Smith earned credit from the Grammys for his songwriting work on “Glory,” but not at the Oscars because the Academy of Motion Picture Arts and Sciences limits the number of nominees in the best original song category to four. Image: Invision/Jordan Strauss via AP

For Grammy-winning producer-songwriter Alexander Shuckburgh, the Academy Awards are so close and yet so far.

Shuckburgh should be celebrating as an Oscar nominee since a song he co-wrote — “All the Stars” from the “Black Panther” soundtrack — is competing for best original song at Sunday’s show.

That’s because the Academy of Motion Picture Arts and Sciences limits the number of nominees in the best original song category to four, forcing one of the song’s five writers to take a backseat. Shuckburgh, also known as Al Shux, shares writing credit for “All the Stars” with rapper Kendrick Lamar; R&B singer SZA; Anthony Tiffith, the CEO of Top Dawg Entertainment, whose roster includes Lamar and SZA; and Mark Spears, the producer-songwriter known as Sounwav who has worked closely with Lamar for a decade.

Some feel strongly that Shuckburgh should be able to call himself “an Oscar-nominated songwriter.”

“It is important that in keeping with the times, all credited songwriters be recognized when a song is being considered for an award. If the PROs (performing rights organizations) have a writer listed and that writer is receiving royalties from them for the song, there is no question that the writer be acknowledged along with the others,” Linda Moran, the president and CEO of Songwriters Hall of Fame, said in a statement to The Associated Press.

“Who decides and what method is used to determine which writer or writers over the allowable maximum does not qualify for the award? It is definitely not fair to limit the number of writers,” Moran continued. “In order for an organization to be relevant, it is important that it be flexible and willing to move forward.”

Shuckburgh declined to be interviewed for this story and representatives for Shuckburgh and Lamar didn’t reply to emails seeking clarity on how the “All the Stars” songwriters decided who would be left off the Oscars ballot. The academy said it couldn’t disclose that information when asked by the AP.

Although big-name acts like Eminem, Bruce Springsteen and Stevie Wonder have won the best original song Oscar, the last few years have seen more and more pop stars earn nominations for songs that hit big on radio, from Justin Timberlake’s “Can’t Stop the Feeling!” to the Weeknd’s “Earned It.” And those songs, which range from rap to pop to R&B to dance, tend to feature a large number of songwriters.

The Top 10 songs on this week’s Billboard Hot 100 chart, for example, includes songs written by three people (Marshmello & Bastille’s “Happier”) to 12 (Travis Scott’s “Sicko Mode”). And last year’s Grammy for song of the year — a songwriter’s award — went to eight people for the first time when Bruno Mars’ “That’s What I Like” won the prize.

Shuckburgh, who won a Grammy for co-writing Jay-Z’s “Empire State of Mind,” earned a nomination for best original song at the Golden Globes for “All the Stars”; he also received three nods at this year’s Grammys for his work on the track, including record of the year, song of the year and best song written for visual media.

Like Shuckburgh, Che “Rhymefest” Smith earned credit from the Grammys for his songwriting work on Common and John Legend’s “Glory,” but not at the Oscars.

Smith told the AP he worked with Common on his two verses on the song, which won best original song at the 2015 Academy Awards and is from the 2014 film “Selma,” based on the 1965 civil rights marches led by the Rev. Martin Luther King Jr.

“You have individuals who are making songs about injustice while at the same time, cheating or leaving out the collective that helped them bring that creation to the table,” Smith said. “Sometimes we forget, we get caught up in the individual and don’t give credit to the power of the collective.”

Smith, who won a Grammy alongside Kanye West for co-writing the hit “Jesus Walks,” said he respected West for making sure everyone who worked on a song got credit (some of West’s songs have featured close to 20 songwriters, including “All Day” featuring Paul McCartney).

Smith said it was a longtime dream of his to work with Common, which first happened on “Glory.” But as he watched the 2015 Golden Globes from his couch with his family, he wondered why he didn’t get invited to the show. And when it was announced that Common and Legend won best original song, he was surprised he didn’t see his named listed as one of the songwriters.

“I had to call Common and ask him, ‘What’s going on?'” he said. “I’m sitting there with my family, with my wife and my daughter and my mother and we’re watching, and we’re excited and I’m wondering, ‘Why didn’t I get a ticket?’ Then you see writers and your name doesn’t come up and then your family looks at you and they’re like, ‘OK, what happened?’ And you don’t know what to say.”

Smith said he and Common no longer talk to one another, adding: “But it’s not that we don’t speak because anybody’s angry at anybody, it’s just, after that, it was just, you know, you just don’t speak.”

“I love Common. I respect him as an artist. I think he’s dope as hell. In fact, he’s one of my heroes,” he added, calling the controversy “a learning experience.”

“You can’t go around feeling cheated or you can’t move forward. So, I don’t feel cheated. Also, it was an opportunity for me. I did get a Grammy. I did get a Soul Train Award. I did get a plaque. I was part of a great thing that happened, and guess what? More than me, the world needed ‘Glory.’ I think that’s another thing — when we talk about the ego, we as artists do have to look beyond ourselves. Maybe you won’t get everything you think you should have, but there’s a bigger picture. The bigger picture is the healing that the song was able to do. I have to throw me to the background and be like, ‘Yo, let the world have it.'”

Though “All the Stars,” which reached peaked at No. 7 on the Hot 100, is a strong contender Sunday, Lady Gaga’s “Shallow,” co-written with Mark Ronson, Andrew Wyatt and Anthony Rossomando, is the front-runner. “Shallow” won the Golden Globe and two Grammys: one for its songwriters and the other for Gaga and Bradley Cooper’s vocal performance.

The other best original song nominees are “I’ll Fight” from the Ruth Bader Ginsburg documentary “RBG,” written by Diane Warren, marking her tenth nomination; “The Place Where Lost Things Go” from “Mary Poppins,” written by Marc Shaiman and Scott Wittman; and “When a Cowboy Trades His Spurs for Wings” from “The Ballad of Buster Scruggs,” written by David Rawlings and Gillian Welch.

Like Shuckburgh, Beyonce was in similar shoes when her song “Listen,” from the “Dreamgirls” soundtrack, was nominated for best original song at the 2007 Academy Awards. At that point the category limited the writers to three; “Listen” was written by Henry Krieger, Scott Cutler, Anne Preven and Beyonce, and Beyonce’s name was left off the submission.

The rules changed for the 2012 show, where the limit was raised to four. But throughout the years the rules have had many changes: Though at one point the writers were limited to three, at the 1982 Oscars four writers won best original song (Burt Bacharach, Carole Bayer Sager, Christopher Cross and Peter Allen won for “Arthur’s Theme (Best That You Can Do)” from “Arthur.”)

The academy said it meets yearly to discuss its rules and makes adjustments accordingly.

“Artists have to speak up. We speak up for a lot of issues these days. People say, ‘Oh, the Oscars are so white.’ And guess what? The Oscars said, ‘OK, we’re going to try to diversify,'” said Smith. “I think in my case, nobody said anything. It wasn’t anything against me, it was probably more of a fear of the institution.” CC

Who will win the Oscars?

5 burning questions ahead of Oscar nominations