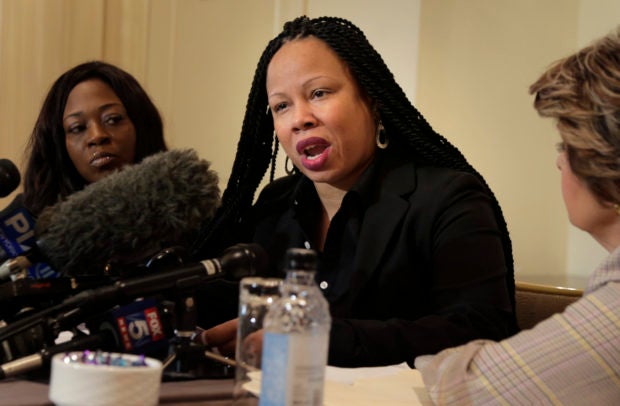 Rochelle Washington, left, and attorney Gloria Allred, right, look on Latresa Scaff speaks during a news conference in New York, Thursday, Feb. 21, 2019. Scaff and Washington are accusing musician R. Kelly of sexual misconduct on the night they attended his concert when they were teenagers. Image: AP/Seth Wenig

Two women said Thursday that singer R. Kelly picked them out of a crowd at a Baltimore after-party in the mid-1990s when they were underage and had sex with one of the teens although she was under the influence of marijuana and alcohol and could not consent.

Scaff said she was 16 and Washington was 15 when the pair attended a concert and after-party featuring Kelly and LL Cool J in Baltimore.

Scaff said Kelly singled the girls out at the after-party, had a member of his entourage ply them with drugs and alcohol and told them to meet him at his hotel suite.

“We both went to the hotel, thinking there was going to be another party there,” Scaff said.

With Washington in the bathroom, Kelly asked Scaff for oral sex and then had intercourse with her although she was under the influence of marijuana and alcohol and “did not have the capacity to consent,” she said.

“When I first met R. Kelly that night, I was very happy and excited because I was young and starstruck,” Scaff said. “However, now that I am an adult, I feel hurt by what he did to me when I was only 16 years old and under the influence of alcohol and marijuana which had been provided to me at his after-party.”

Washington said that now she’s a mother, she feels she was taken advantage of by Kelly. “I just want justice for anyone that was hurt or violated,” she said. “I want victims to know it’s not their fault.”

Allred, who said she has several clients who allege that they were sexually abused by R. Kelly, not all of whom have spoken out publicly, said Scaff and Washington were brave to come forward.

Allred said the two women planned to meet with officials from the U.S. attorney’s office for the Eastern District of New York. She did not say why she had chosen that jurisdiction for alleged crimes in Maryland.

Kelly’s lawyer, Steve Greenberg, has said his client never knowingly had sex with an underage woman. An email was left with Greenberg seeking comment about Scaff’s and Washington’s allegations.

Kelly, whose legal name is Robert Kelly, has faced allegations of sexual misconduct with underage girls for decades and has denied them.

The now 52-year-old was acquitted in 2008 of child pornography charges stemming from a sex tape he allegedly made with an underage girl. CC