Lolit Solis says she may be implicated in Kris-Nicko issue; Falcis bros tell her why 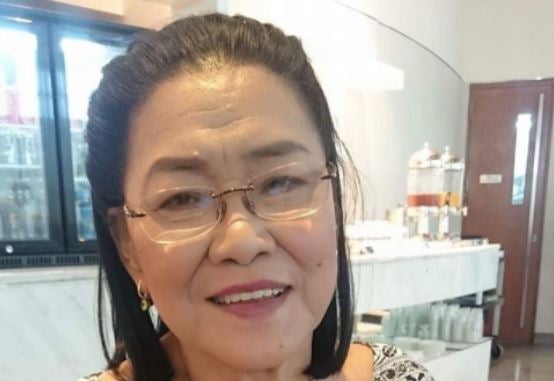 Talent manager and columnist Lolit Solis does not understand why she may be sued by Nicko Falcis, Kris Aquino’s former project manager. Solis aired her concern on Instagram on Jan. 27, telling her readers she is thinking of consulting lawyers Norman Golez and Biboy Malaya.

(I was called up by Mercy Lejarde. She said Nicko Falcis will reportedly file a case against me. Why? I do not understand. I feel like calling Atty. Norman Golez and Biboy Malaya to consult, but then I thought these are all still just reports.)

(Even when I am not involved in something, I still get suddenly dragged into it. At the age of 72, there would still be a case? This is too much.)

She also said she did not know why she seemed to have been involved in the Falcis-Aquino issue.

“Kris, bakit ako nasali? Cris Roque why? Bakit Leo Espinosa? Ay naku, me and my being so clueless…”

(Kris, why am I involved. Cris Roque, why? Why, Leo Espinosa? Oh my, me and my being so clueless.)

Brothers Nicko and Atty. Jesus Falcis did not waste time in replying to Solis and took to her Instagram post to give light to her queries.

Jesus told Solis that she was the first one who named his brother Nicko during the early days of the issue. He also said that Solis created an intrigue by making it look as if Nicko had a relationship with Thai actor Peach Chirathivat, and that Nicko stole money from Aquino because he was funding him. 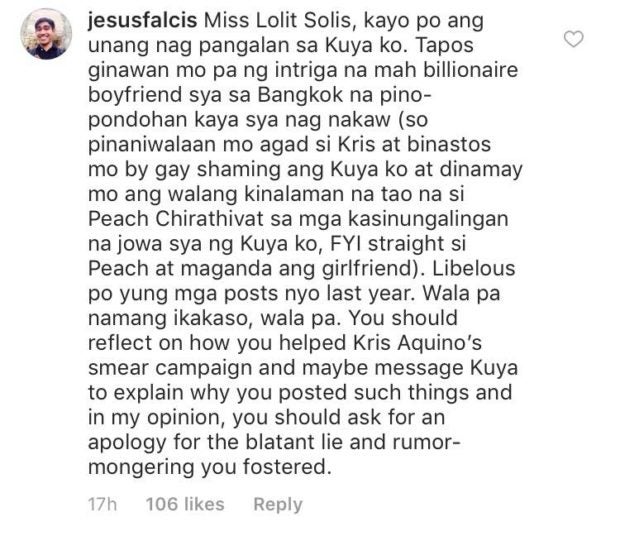 Jesus also called Solis out for gay-shaming Nicko and for involving the innocent Chirathivat in the issue, who he says is straight and has a girlfriend.

“Libelous po yung mga posts nyo last year. Wala pa namang ikakaso, wala pa,” he clarified. (Your posts last year were libelous. There are no cases filed yet, none yet.)

He added, “You should reflect on how you helped Kris Aquino’s smear campaign and maybe message Kuya to explain why you posted such things.”

Jesus also told Solis to ask for an apology for the rumor-mongering she fostered last year.

Solis did make a post on Instagram last Oct. 1, 2018 where she name-dropped Nicko. She also shared a “side story” to the issue, alleging that Nicko may have a relationship with a Thai actor who may be the reason why Nicko was tempted to steal money.

Meanwhile, Nicko took to Solis’ post and told her to be careful with her libelous statements.

“We knew how she played it through you, Darla and the rest of the paid journalists in her payroll, as she maintained her image as the victim last year,” said Nicko. “Remember, I’m an accountant, so I see how things get distributed.” 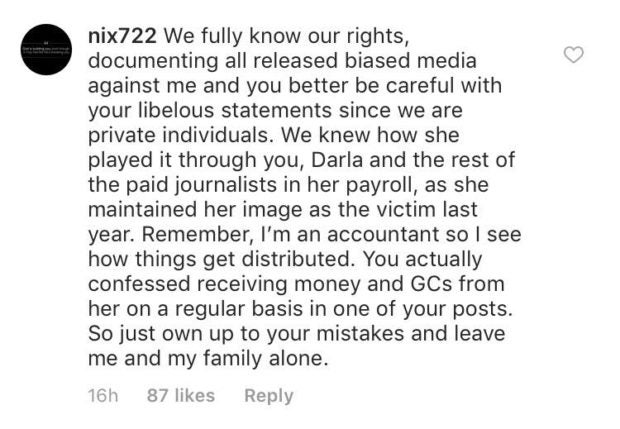 Nicko reminded Solis that she confessed to receiving money and gift checks from Aquino in the past. “So just own up to your mistakes and leave me and my family alone,” he told Solis.

True enough, Solis did post back in June 1, 2018 about the extravagant gift check Aquino gave her, with a promise of replenishment if Solis stayed “good.”

“Remember — you’re going to be good to me for 2 months and then July I’ll replenish your GCs,” Aquino wrote in a letter to Solis then.

Aquino filed qualified theft charges against Falcis in November 2018 for allegedly stealing funds from her production company, Kristina C. Aquino Productions (KCAP) for personal use. Falcis, on his end, maintained that he never stole money from Aquino, and that she was bullying him and his family. JB