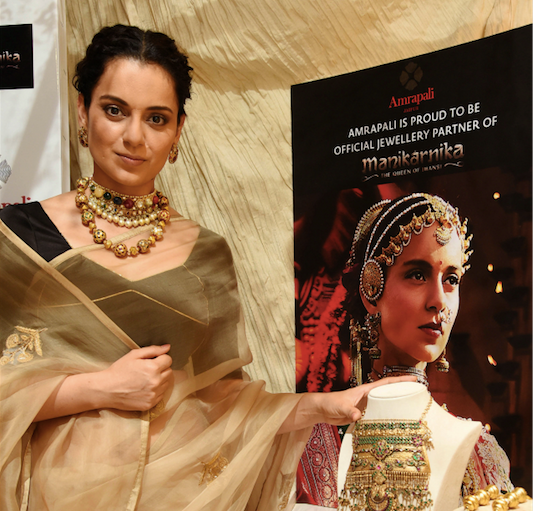 Released just in time for Republic Day, the Hindi-language “Manikarnika: The Queen of Jhansi” is not without controversy, with its star Kangana Ranaut threatening to “destroy” protesters who say the film alludes to an affair with a British officer.

Rani Laxmibai was a leading figure in the failed 1857 uprising against Britain’s East India Company, which led London to impose direct control, and is also revered for defying gender stereotypes.

Killed in the Battle of Gwalior in June 1858 that ended the rebellion, she has lived on as an independence icon and is usually depicted brandishing a sword while leading her troops to war on a horse.

“Her story is one that all Indians have grown up listening to, whether it’s at school or from our mothers and grandmothers,” trade analyst Akshaye Rathi told AFP.

The film, which sees its blood-spattered star deftly despatch red-coated British soldiers with her sword, hits screens on India’s Republic Day weekend, one of two annual holidays that celebrate independence.

Industry watchers expect audiences to flock to a flick that will be full of nationalistic fervor, featuring elaborate costumes and grandiose battle scenes.

“People are in the mood for a certain occasion and playing into their mind at that point of time is fine,” said Rathi.

“We express our patriotism the most on Independence Day and Republic Day so why not talk about the people who have contributed to our struggle for freedom, which of course includes the Queen of Jhansi,” he added.

The filmmakers will be hoping “Manikarnika” does better than Bollywood’s last anti-colonial epic — the “Pirates of the Caribbean” style “Thugs of Hindostan” which bombed at the box office in November despite a star-studded cast.

Indian media reports say fanatical groups belonging to India’s Rajput caste have held protests against what they believe will be a scene alluding to a relationship between Laxmibai and a British officer.

They also say that images of her dancing go against the community’s tradition.

Ranaut, the award-winning star of hits such as “Queen” (2014) and “Tanu Weds Manu Returns (2015), said in a statement last week that she had received threats from the fringe group Rajput Karni Sena.

The organization famously tried to disrupt the release of “Padmaavat” last year over its portrayal of a legendary Hindu queen.

“Four historians have certified ‘Manikarnika’, we have got censor certificates as well. Karni Sena have been conveyed this but they are continuing to harass me,” Ranaut, 31, said Friday.

“If they don’t stop then they should know I am also a Rajput and I will destroy each one of them,” the actress added.

A national spokesman for the Rajput Karni Sena said later that the group was not against the movie, blaming “vested interests” for using the organization’s name to further their own agenda.

At a recent training session on the outskirts of Mumbai, three of them — barefoot and dressed in orange saris — swished swords above their heads before crashing them into their sparring partners’.

Amruta Dalvi, 20, said she took up “Mardani Khel”, as martial arts are known locally, for self-defense, but is thrilled her skills have landed her a role in a Bollywood film.

“I was standing next to Kangana, holding a sword and running amid horses. We were her army and it felt good,” she told AFP. CC