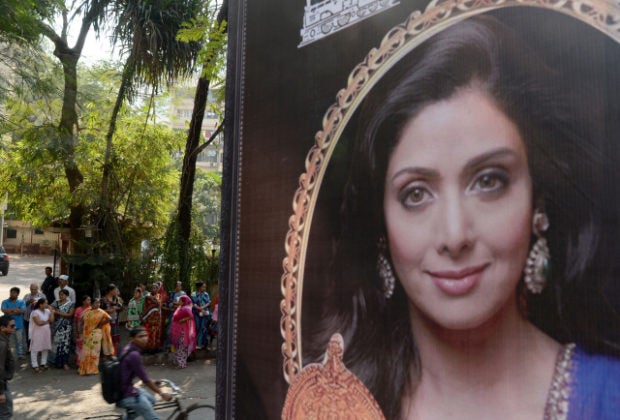 Sridevi, who died in February aged just 54, received the award for best actress in a leading role for her final film, “Mom”. Image: AFP/Punit Paranjpe

Bollywood superstar Sridevi Kapoor was honored for her final role at India’s movie awards in Bangkok, winning the best actress prize at the colorful celebration of dance, music and film just months after her shock death.

But two of the most prestigious prizes were awarded in the absence of their winners.

Irrfan Khan, known internationally for his roles in blockbusters “Life of Pi” and “Slumdog Millionaire”, scooped the prize for best actor in a leading role but did not attend the ceremony after revealing earlier this month that he had a rare tumor.

The 51-year-old Indian actor, who was in the 2016 film “Inferno” alongside Tom Hanks, is one of Bollywood’s most globally-recognized exports, with a stellar career at home and in Hollywood.

He bagged the award for his role in “Hindi Medium”, a film highly critical of the class divide in India in which he plays the role of a father trying to get his daughter into a prestigious school.

Sridevi, who died in February aged just 54, received the award for best actress in a leading role for her final film, “Mom”, a thriller in which she seeks to avenge the gang-rape of her stepdaughter.

One of the biggest names in Hindi cinema, Sridevi drowned in her bathtub at a hotel in Dubai, where she was attending a wedding. Thousands of heartbroken fans lined the streets of Mumbai as a condolence service was held.

The IIFA always holds its awards ceremony outside of India to demonstrate Bollywood’s international appeal.

With an audience of more than 850 million, the IIFA Awards is India’s biggest media event and also one of the world’s most-watched annual entertainment shows. It will be broadcast worldwide on television on July 29.

“The fact that we are 1.2 billion people in India helps” boost the audience, said Sabbas Joseph, the event’s organizer, adding that viewing figures are also strong in the Middle East and in countries with large Indian communities. CC