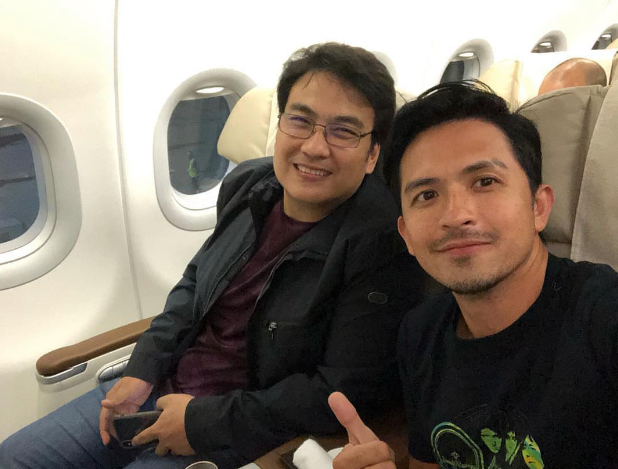 Actor Dennis Trillo recently drew flak from netizens when he shared a picture of him inside a plane with former senator and action star Bong Revilla. The two appeared to be on their way back to Manila after attending the Sinulog Festival in Cebu city last Sunday, Jan. 20.

Trillo seemed thrilled to be sharing a flight with Revilla and did not miss the opportunity to take a picture with him. However, the photo on Trillo’s Instagram has since been deleted.

It seems, however, that some netizens were not pleased with Trillo’s association with Revilla as they took to the comments section to air their opinions.

A certain Victor (@victorgavarra) warned Trillo and told him to be careful when it comes to the people he associates with.

“Yuck! Be careful who you associate yourself with @dennistrillo,” the netizen wrote. “You’re a good actor pero di ka nag-iisip #unfollowing.”

Another (@mleenow) asked Trillo how he could support Revilla, saying the latter is corrupt and a trapo (traditional politician belonging to a conventional and corrupt ruling class).

Trillo, however, called on to the netizen to relax, saying they just happened to be sitting next to each other in the plane.

Revilla saw himself behind bars in 2014 when he turned himself over to anti-graft court Sandiganbayan after charges against him concerning his alleged involvement in the P10-billion pork barrel fund scam were filed. Prior to his crossover to politics, he made his name as an action star in Pinoy superhero movies “Panday” and “Captain Barbell,” among others.

Revilla was acquitted of plunder cases in relation to the pork barrel scam by the Sandiganbayan last month. The anti-graft court said the prosecution was not able to prove Revilla’s guilt over allegations he had embezzled P224 million from his pork barrel.  Revilla is gunning for a Senate seat in the upcoming May 13 elections.  /ra