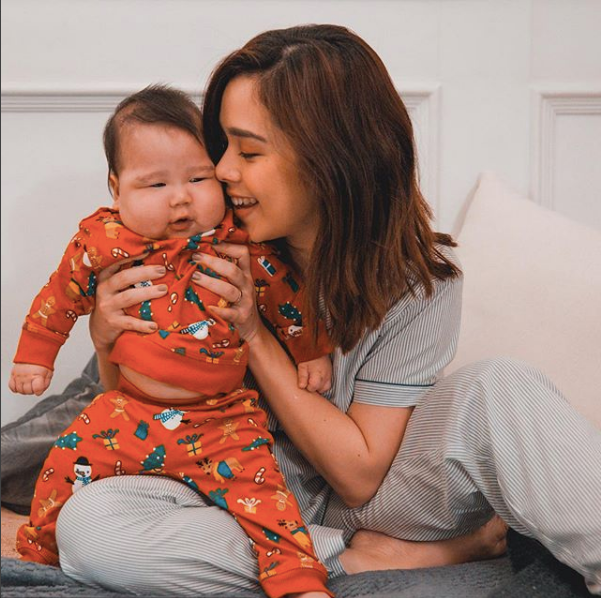 Although having a rough start, Saab Magalona’s son Pancho is now healthy and happy—and is also being adored by many on social media.

However, one netizen aired his concern on Pancho’s appearance, particularly his weight. Magalona quickly defended her son in a Twitter post Wednesday.

Magalona first showed a photo of her “boys”–Pancho and his dad Jim Bacarro. The “Cheats” singer has a habit of posting photos of her baby boy, adding the hashtag #DailyPancho.

While netizens once again complimented her baby boy, a netizen named Shen Yue’s (@totoongAgila) showed concern over Pancho’s weight. “I admit that the baby is cute. Pero dapat nababantayan din ang diet nito (But I think his diet should also be checked),” the netizen stated in a now-deleted tweet.

Magalona did not let this pass and replied to his/her comment. “He is breastfed on demand with complementary homemade solids just once a day,” the singer said. “Doctor’s orders: more breastmilk because she wants him to grow taller.”

She also had this to say to the netizen, “Pls don’t make me give a medical report w/each baby photo.”

He is breastfed on demand with complementary homemade solids just once a day. Doctor’s orders: more breastmilk because she wants him to grow taller. Pls don’t make me give a medical report w each baby photo. 🤗 https://t.co/yQiZT3bHw2

Pancho was born prematurely on Feb. 8 this year, along with twin sister Luna who died at birth. He recovered at the Neonatal Intensive Care Unit until he was taken home in April. He also underwent surgery to remove an Ommaya Reservoir—a small silicon catheter placed on his scalp to relieve pressure on his brain from excessive fluid buildup.  /ra

Saab Magalona on coping with loss of baby Luna: ‘It’s going to be a long process’

Saab Magalona urges fans not to pit babies against one another: ‘They are all cute’