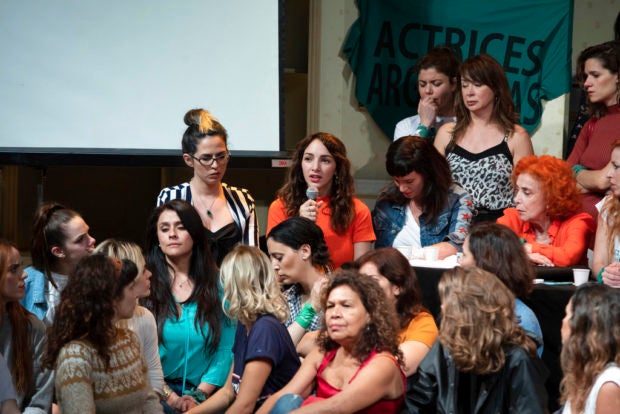 Accompanied by members of Argentine Actresses, Thelma Fardin spoke during a press conference on Tuesday, Dec. 11, 2018, where she accuses television star Juan Darthes of raping her when she was 16-years-old, in Buenos Aires, Argentina. Image: AP/Joaquín Salguero

BUENOS AIRES, Argentina (AP) — An Argentine television actor who participated in a video asking women to denounce sexual assaults is himself being accused of rape.

Actress Thelma Fardin accused Juan Darthes on Tuesday night of raping her in 2009 when she was 16 and he was 45. She spoke during a news conference act in Buenos Aires, where she was joined by dozens of other prominent actresses.

“Today we say enough. Listen to us, it’s time that the impunity for abusers ends,” actress and singer Lali Esposito said in a statement read by her and other artists.

Fardin said she had recently filed a criminal complaint in Nicaragua, where she says she was raped by Darthes in a hotel during a promotional tour for “Ugly Duckling,” a children’s television series.

Darthes has denied the allegation. Three other women have accused him of harassment or abuse. Writers, politicians and journalists have shown their support for Fardin on social media.

The case has brought back memories of the #MeToo movement that began in the United States in 2017 after sexual assault allegations surfaced against producer Harvey Weinstein.

Argentine President Mauricio Macri said Wednesday, Dec. 12 on Twitter that his government has canceled broadcasts of a public service announcement against gender violence that was made in 2016 and featured Darthes. Macri said the move is “out of respect” for Fardin’s criminal complaint.

“Our commitment is to work to eradicate all types of violence against women,” Macri said. KM