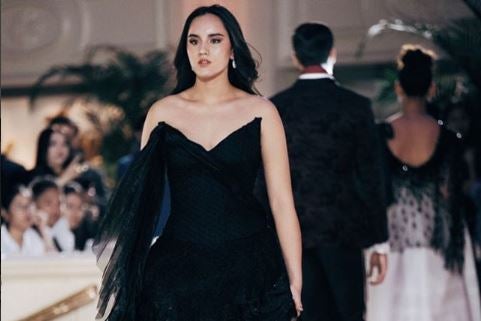 Juliana Gomez, the unica hija of Rep. Lucy Torres-Gomez and Ormoc Mayor Richard Gomez, looked nothing short of radiant as she walked down the runway for Filipino fashion designer Randy Ortiz’s milestone show.

The fashion-cum-art show “Randy O 30: Homage” was held last Nov. 26 at The Peninsula Manila’s Conservatory, and saw the likes of the spawn of seasoned models—children of Wilma Doesnt, Tweetie de Leon Gonzalez, Hans Montenegro, among others—down the catwalk.

Juliana was among those who also strutted down the runway and shared the moment on her Instagram on Nov. 27. In her post, she can be seen wearing a black  gown and minimal makeup and jewelry as she looked ahead.

“Focused on trying to not slip for #RandyO30 #RandyHomage,” wrote Juliana.

Lucy, on her end, was the ever supportive mother, as she took to her daughter’s post and wrote, “Beautiful my baby girl.”

In another Instagram post, Juliana can be seen standing next to Ortiz himself, both holding bouquets in their arms. She paid tribute to the fashion designer, as she shared how he has been with her through many of her life’s milestones.

“You made my baptismal gown, many of my birthday party dresses, prom dress, two of the outfits I wore on my debut just a few months ago and last night, there I was, walking for you in your beautiful show,” wrote Juliana. “I love you @randyortizfilipinodesigner.”

Juliana’s close ties with the designer just could not get any more palpable, or surprising, as her own mother happens to be Ortiz’s muse. He, after all, was the one who crafted Lucy’s wedding gown when she got married to Richard back in 1998.

As per Lucy, who also paid homage to the designer on Nov. 27, they continued on working with each other and have been so 20 years and countless more gowns later.

“He is more than just my favorite designer, he is friend, family, kindred spirit,” shared Lucy. “We laugh much whenever we are together, we keep each other’s secrets, we trust each other.”  /ra