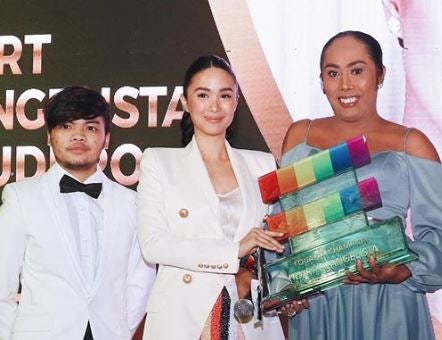 Heart Evangelista shared on social media that she has received the Equality Champion Award for her advocacy.

In her Instagram post today, Nov. 16, Evangelista showed pictures of her from the Equality Night event including one that showed her receiving the award on  stage.

Evangelista is a staunch supporter of the LGBTQIA+ community and in the past has rallied behind the Sogie (Sexual Orientation and Gender Identity or Expression) Bill, also known as the Anti-Discrimination Bill. Back in July, during President Rodrigo Duterte’s third State of the Nation Address (Sona), Evangelista wore a rainbow pin to the red carpet and used the event to show her support for the Sogie Bill.

“Filipinos have always been known to be a people of love, and I believe that love is one that is never discriminatory; it is a love that is inclusive to all, regardless of age and sexual orientation,” Evangelista wrote in her post.

Filipinos have always been known to be a people of love, and I believe that love is never discriminatory; love is inclusive to all, regardless of age and sexual orientation. Thank you for giving me the Equality Champion Award. 💜 I will continue to create awareness for the rights of the LGBTQIA+ community, and will encourage everybody to do the same. Let's all join forces to create a Philippines that is diverse, accepting, and full of love. 🌈

Grateful for the award, Evangelista vowed that she would uphold her advocacy in raising awareness for the rights of the LGBTQIA+ (Lesbian, Gay, Bisexual, Transgender, Queer, Intersex, Allies) community.

“I will continue to create awareness for the rights of the LGBTQIA+ community, and will encourage everybody to do the same.”

She also called on her fans to “join forces to create a Philippines that is diverse, accepting and full of love.”

Many celebrities hold the same sentiments in regard to the Sogie Bill. In the past, stars Anne Curtis and Iza Calzado used their huge social media following in advocating for LGBTQIA+ rights. Back in July, the two reached out to Senate President Tito Sotto and Sen. Joel Villanueva, known for thumbing down the idea of legalizing same sex-marriage in the country, to join them in the cause they hold dear.

Vice Ganda, meanwhile, addressed Sotto and Villanueva last October during the “Tawag ng Tanghalan” segment on “It’s Showtime.” He spoke about the struggles he had and continues to endure as a gay man, such as never knowing which restroom to use.