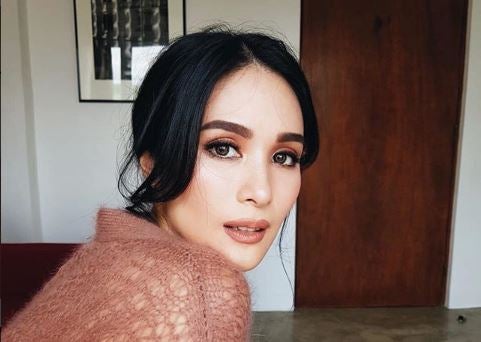 Being the fashionista that she is, Evangelista went for an edgy look with a black turtleneck sweater and a leather high-waisted skirt. She topped this off with a metallic red lipstick and a red sling bag as she posed for the camera.

Evangelista was in Italy where she attended the Ferragamo fashion show during the Milan Fashion Week. Many of her fans gave their full support to Evangelista as she continued to stun in just about every place she went to.

One netizen, a certain Jermaine Santos (jermainesantos9907), however, went below the belt with an unwarranted comment that had no connection to Evangelista’s post whatsoever. The comment, as of this writing, seemed to have been deleted and the netizen’s account deleted.

“Heart, your miscarriage is KARMA,” wrote the netizen.

It’s known that Evangelista suffered from a miscarriage last June, losing her three-month-old fetus who she had already called”Mira”. The miscarriage left her heartbroken and had her turning to art to cope with the pain.

Upon seeing the netizen’s comment, Evangelista replied only with kind words.

“God has a plan. Never ever again come close to saying that,” she wrote. “I may be helpless but God is watching. Don’t do it for me… do it for your soul. Fandom should never turn you into a monster. Ever. You should pray… God bless you.”

Despite being a celebrity, Evangelista has had her own fair share of bashers and bullies, even while growing up. As a student, she was bullied by her peers in Colegio San Agustin-Makati, a reality she revealed back in August when her former bully from high school reached out to her to apologize. She found herself moved over the out-of-the-blue message from her former bully and said that it made her cry good tears.

As per the United Nations Representative of the Secretary-General on Violence Against Children, bullying affects a huge number of children the world over and compromises their health, emotional well-being and academic work. Bullying is also correlated with long-lasting repercussions that may continue into one’s adulthood, and is detrimental to all those involved, both victim and perpetrator, thus making it a serious concern of global relevance.  /ra

Heart Evangelista causes a stir for carrying bottle of Chanel No. 5 in an airplane