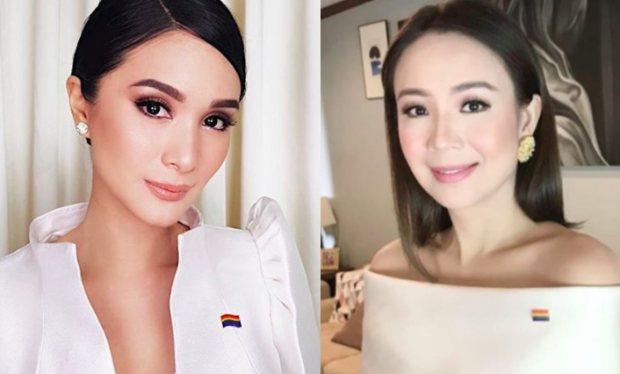 For many, the ensembles donned by lawmakers and their partners and guests were the focus of attention in President Rodrigo Duterte’s third State of the Nation Address (Sona) on Monday. Sen. Nancy Binay’s Filipiniana attire, for example, matched the blue carpet, while Senator Grace Poe wore an understated white, knee-length dress, and Ilocos Norte Governor Imee Marcos’ bloody red gown.

For some, it’s the small details that count. Accessories certainly weren’t absent in the occasion, and for Heart Evangelista and Tootsy Angara, their rainbow pins were perfect in delivering their message.

Evangelista, who is married to Senator Francis “Chiz” Escudero, is known for her classic and chic style, so her ensemble during the Sona was a matter to keep one’s eyes peeled for.

Evangelista took to her Instagram on July 23 to share to her fans her finished look for the SONA, showing off the rainbow pin attached on the left side of her modern Filipiniana dress.

“Everyone has the right to live, work, and dream,” wrote Evangelista. “The SOGIE bill is a step in the right direction to guarantee the protection of those rights, especially for our friends in the LGBTQIA+ community.” SOGIE stands for Sexual Orientation and Gender Identity or Expression.

Evangelista shared that the SOGIE bill, also known as the Anti-Discrimination Bill, was passed by Congress last year . She, however, said that not all is rosy, as much has yet to do be done.

“Last year the bill made great progress but we still have a long way to go. My husband and I are in full support of this bill and hope to see it move forward and become a law.”

It wasn’t just Evangelista who showed her support for the SOGIE bill. Tootsy Angara, wife of Sen. Juan Edgardo “Sonny” Angara, also took to her Instagram to share a photo of her wearing a rainbow pin.

“Wearing this pin to show my all out support for the Anti Discrimination Bill as I join the call to fight for equality and end all forms of discrimination,” wrote Angara. “Imagine a world where you will not be judged for race, gender, faith, ethnicity…Where love can flow freely…”

In another picture she shared, she and Senator Angara strike a pose at the House of Representatives.

“Again… showing my all out support for the Anti Discrimination Bill,” wrote Tootsy. “Imagine a world where people use their powers not to create conditions of oppression that lead to violence, but conditions of freedom that lead to peace.”

Last September, Congressmen passed the SOGIE bill on third and final reading, a moment that was celebrated as a victory for the LGBTQ community. Under the bill, it will be illegal to “out” or reveal the sexual orientation of a person without his or her consent.

Other offenses include engaging in discriminatory speech that insults and vilifies the practices of the LGBTQ community, denying the LGBTQ community access to private medical and health services based on their gender, and forcing them to undertake psychological examination as a means of determining or altering their sexual orientation.

The offenses shall be penalized with a fine of not less than P100,000 but not exceeding P500,000. Imprisonment, meanwhile, ranges from one year and 10 years.  /ra

Under Sogie bill, it’s illegal to ‘out’ anyone