Actor Michael Douglas gets star on Hollywood Walk of Fame 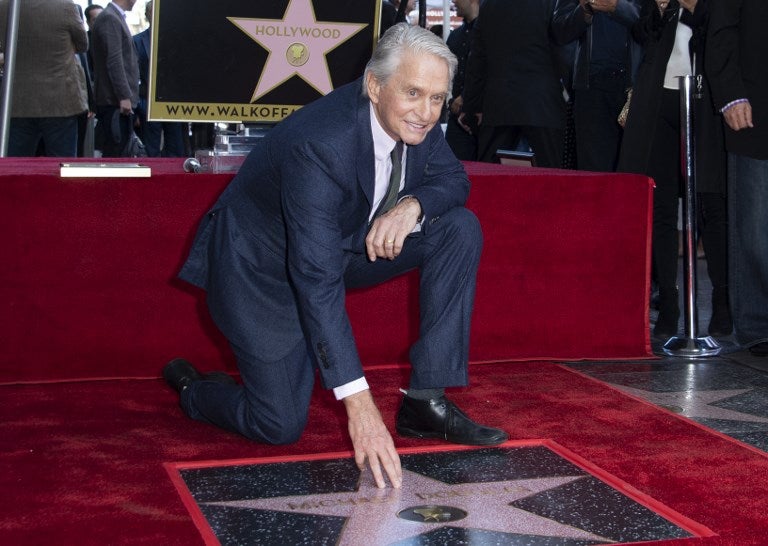 Actor Michael Douglas poses with his Star on the Hollywood Walk of Fame, in Hollywood, California, on November 6, 2018. AFP

LOS ANGELES, United States – Oscar-winning actor Michael Douglas got a star on the Hollywood Walk of Fame on Tuesday in honor of his 50 years in show business.

The megastar was joined at the ceremony by his 101-year-old father and Hollywood legend Kirk Douglas. Also present was Jane Fonda, who starred with him in the 1979 drama “The China Syndrome.”

Also attending was Douglas’s wife, the actress Catherine Zeta-Jones, and other family members.

“This is a great honor and I’m not getting any younger, I want to enjoy it with (my family),” the 74-year-old actor said as the star was unveiled.

Douglas got emotional and teary-eyed as he addressed his father, telling him that his presence at the event meant a lot.

Speaking at the ceremony, Fonda wondered why it took so long for the younger Douglas to finally get his star.

“Michael Douglas and I share something far more specific and unique than acting together,” she said. “We both come from families referred to by the press as Hollywood royalty.

“Both of our fathers were movie legends, and thankfully, Kirk Douglas is still with us,” she added, referring to her late father Henry.

The younger Douglas was just 29 when he earned his place among Hollywood’s elite as the producer behind “One Flew Over the Cuckoo’s Nest.” The movie was the first in 40 years to sweep the “big five” Oscars for best picture, director, actor, actress and screenplay.

Douglas then became one of the most bankable stars in the world through a series of roles in cinematic hits including “Romancing the Stone,” “Fatal Attraction” and “Basic Instinct.”

His new comedy series, “The Kominsky Method,” about a disgruntled aging actor who gives acting lessons, begins streaming on Netflix on November 16. /cbb