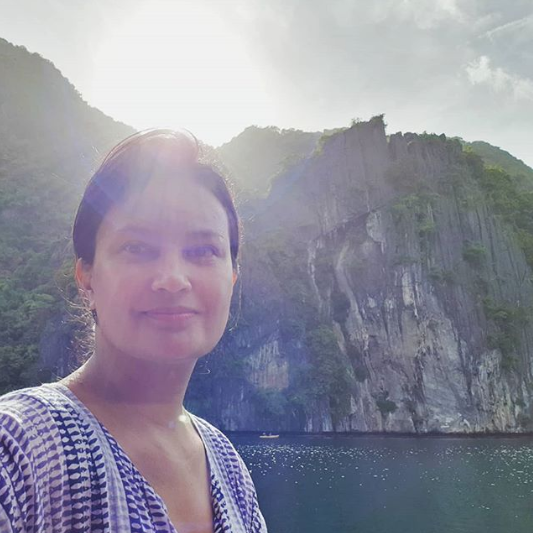 Over the Undas weekend, celebrities took a well-deserved break with their families. For lifestyle TV host Daphne Oseña-Paez, El Nido, Palawan was her choice of getaway with her family.

In her own words, El Nido is her favorite place in the Philippines, for good reason. Famed for its limestone cliffs, turquoise waters and white-sand beaches, the destination has been regularly placed on lists of the most beautiful beaches in the world.

However, Oseña-Paez observed some poor tourism practices which she documented on social media yesterday, Nov. 3.

She noted that El Nido’s Small Lagoon was congested compared to when she visited back in 2005. “I understand there’s growth in the tourism industry. But is there a way for the local government to manage this traffic?” she wondered.

She also mentioned that there was currently no system to track how many kayaks were in the lagoon at any given time.

Volleyball player and TV host Gretchen Ho concurred with Oseña-Paez’ observation on Twitter. “Went to the small lagoon 4 years ago,” she said in a tweet.  3-4 kayaks at the most back then. Loved it because of the silence. Sad to see it this congested.”

At the town center, Oseña-Paez noticed establishments being demolished for failing to comply with the setback from the shoreline. She said it was the national government, rather than the local government that was placing sanctions.

She told INQUIRER.net exclusively that she learned from immigrant business owners that the Department of Tourism (DOT) and the Department of Environment and Natural Resources (DENR) visited a few weeks back to inspect establishments. The agencies are expected to return on December during high tide, she said.

Seen in #ElNido town. Establishments being sliced off and bulldozed because they're either on no-build zone or encroached into beach. Saw the National Govt at work there, apparently @TourismPHL & @DENROfficial came to enforce the law. LGUs & entrepreneurs, pls do good & right. pic.twitter.com/30b90Gn1u5

She shared pictures of buildings along the beach face to face with a bulldozer. “So these business establishments that are facing the beach on Serena Street have to comply with the national government’s enforcement of the laws (which have been in existence for a very long time BTW),” she wrote on Twitter yesterday.

“One foreigner expressed frustration over the lack of transparency,” she told INQUIRER.net. She learned that the local government had given them permits without informing them of how to properly comply with the law, such as allowing them to erect establishments on no-build zones.

“But other owners expressed support for this enforcement because they also care about protecting El Nido,” she added.

She was impressed however with her stay in Lio Beach in El Nido: “It’s a good example of controlled tourism, however it is done by a private developer, Ayala.”

Unfortunately, there were already signs of littering, as she saw a can of juice left on a stone bench along Lio Beach’s port jetty last Oct. 31.

Saw this in the jetty port of Lio Beach, #elnido. It's the cleanest beach Elnido mainland. All it takes is one Basura Mind & Heart to pollute this pristine beach. Nag-iwan ng basura ang isang tao. Nakakainis talaga! How hard is it to hold on to your can til you find a trash can? pic.twitter.com/g8GBWfUEQ5

Pictures of the beach on the lifestyle entrepreneur’s Instagram account show Lio Beach’s untouched sand and water, as seen in the picture below.

She also shared the visit she and her family made to a small island in El Nido, as seen in a picture of her strolling along its clean white sand.

Oseña-Paez wrote in the post’s caption: “Don’t grow too fast, El Nido. We’ve always loved you just the way you were. My favorite place in the Philippines.” JB

Daphne Oseña-Paez against jailing kids below 13: ‘We would lose them forever’