Awards buzz is icing for John Krasinski and ‘A Quiet Place’ 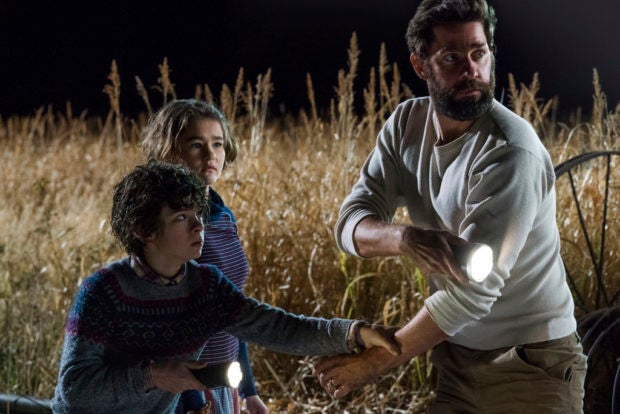 This image released by Paramount Pictures shows Noah Jupe, from left, Millicent Simmonds and John Krasinski in a scene from “A Quiet Place.” The film is a mostly silent horror film about a family trying to live among creatures that attack and kill at the smallest sound. It became a surprise box office phenomenon when it was released in theaters in April, grossing $338.6 million in worldwide ticket sales off a production budget of only $17 million. A sequel is already in the works. Image: Jonny Cournoyer/Paramount Pictures via AP

LOS ANGELES — John Krasinski is still pinching himself over the critical and financial success of his experimental thriller “A Quiet Place,” but the Cinderella year is not over yet. With awards season heating up, “A Quiet Place,” has found its own spot in the conversation. Krasinski who co-wrote, directed and starred in the film opposite his wife, Emily Blunt, is only humbled.

“It’s nothing short of overwhelming,” Krasinski said by phone recently. “Emily and I really are still digesting the fact that we made this small little special movie that some people really connected to. This was literally a meditation on parenting!”

“A Quiet Place” is a mostly silent horror film about a family (Krasinski, Blunt, Noah Jupe and Millicent Simmonds) trying to live among creatures that attack and kill at the smallest sound. It became a surprise box-office phenomenon when it was released in April, grossing $338.6 million (around P18.1 billion) in worldwide ticket sales off a production budget of only $17 million (around P911.1 million). It is now available on home video and streaming, and a sequel is already in the works.

Critics loved its high concept thrills, too, and while many have offered their praise, a certain phone call stands out for Krasinski — the one he got from his favorite director, and friend, Paul Thomas Anderson.

“It was probably 30 minutes long about how much he loved the movie and how much it meant to him and how much he wished movies like this happened every Friday. I genuinely blacked out on that phone call,” Krasinski said. “He said, ‘I’ll tell you the best compliment I can give you: As I was walking back to my car I thought, OK, I need to get back to work.'”

Anderson actually provided some inspiration for “A Quiet Place.” Krasinski said he studied the opening of “There Will Be Blood” and other modern films that employ silence to figure out how he would approach it in his film. He also looked at “Jaws,” ”Rosemary’s Baby” the films of Alfred Hitchcock for ideas in tension-building.

“Jaws” was one of Krasinski’s biggest touchstones, and, oddly enough, the first movie he and Blunt watched together when they had just started dating.

“It’s a perfect film,” he said. “It’s not about a shark, it’s about these characters trying to overcome fears that they’re running away from and at some point those fears are going to manifest themselves in the most bizarre ways.”

In that same way, “A Quiet Place,” to him, is about parenting. He had been sent a script to look at and had an idea to re-write and refocus around those anxieties.

“I was actually holding my three-week-old daughter. We had just had our second daughter,” he said. “Reading a story about parents doing whatever it took to protect their kids was exactly what I was living through.”

Krasinski wasn’t even supposed to direct the film at the outset. The actor and writer, probably best known as Jim on the American version of “The Office,” had previously directed two films — a David Foster Wallace adaptation (“Brief Interviews with Hideous Men”) and an indie family drama (“The Hollars”). Not exactly the kind of calling cards that would prove he could handle a VFX-heavy, big studio genre film. It was Blunt who encouraged him to put his name in for it.

“She said, ‘I’ve never seen you so lit up like this, I’ve never seen you so passionate about something,'” Krasinski recalled. “And it’s true, she knew that it was a very personal story. I was basically writing a love letter to my kids.”
And to his shock, executives at Paramount and Platinum Dunes were behind him.

Blunt also was the driving force behind her own involvement. Krasinski was too scared to even let her read the script while he was working on it, let alone ask her to be in it. She went so far as to suggest a friend for the role of Evelyn.

But then on one cross-country flight, she finally read it, and decided to speak up.

“She legitimately looked sick at the end of it. I thought she was plane sick, so I reached for a barf bag at the same time she said, ‘You can’t let anyone do this movie.’ And I said, ‘What?’ And it was like a romantic comedy where she was proposing to me,” Krasinski recalled. “She said, ‘You have to let me do this part, you HAVE to let me do it.’ I think I screamed ‘YES’ on a flight from New York to LA.”

The film has been in the Oscar conversation since it came out and has continued to pop up on prognosticator lists in Hollywood trades like Variety and awards columns in Vulture and Gold Derby, with special mentions of Blunt’s performance, the effects and the screenplay.

Krasinski is currently writing the sequel, which he teased only with his wife’s response to his pitch.

As for whether Krasinski is ready for the marathon that is awards season?

“Everything is better when Emily is there and the fact that she’s in the conversation for this and for ‘Mary Poppins Returns’? There’s no better person to have by my side for this,” he said. “I’ll be just fine.” MKH

‘A Quiet Place’ sequel in the works