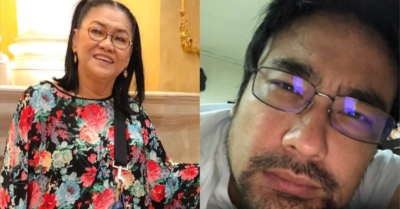 Veteran talent manager and columnist Lolit Solis is in full support of former senator Ramon “Bong” Revilla Jr. in his plans to run for Senate in the 2019 polls. In fact, the detained Revilla filed his certificate of candidacy (COC) today, Oct. 17, via his wife Bacoor Mayor Lani Mercado and son Cavite Vice Gov. Jolo in hopes of reclaiming a Senate seat in the upcoming elections.

Earlier this month, Solis expressed that Revilla was better off returning to show biz instead of politics. As per Solis, he should take a break from politics and focus on his family. In her latest post about Revilla on Oct. 16, however, Solis appeared to have changed her tone, as she wrote that people must let Revilla dream for himself.

Solis shared that she has seen Revilla’s patience and strength of character in the more than four years he’s been detained inside Camp Crame.  Moreover, he hs been passive in accepting his fate and remained trusting in  divine justice.

“Dun ko natanggap na isa itong tao na trustworthy, isang tao na puwede ko sandalan pag kailangan ko ang tibay…” she said. “I have not seen him break down even once, believing the truth will come out, believing he is the fall guy that they cannot destroy.”

“Braveheart. Believer. Survivor. All that and more,” Solis said. “I together with Mang Ramon will not stop Bong Revilla to see his dreams, to fulfill his promise, to continue his love. Bong Revilla for Senator? Fight. Why not?”  /ra

Cops under probe after Bong Revilla posts ‘selfie’ from prison