Filipino-American singer blows ‘The Voice’ judges away during blind auditions 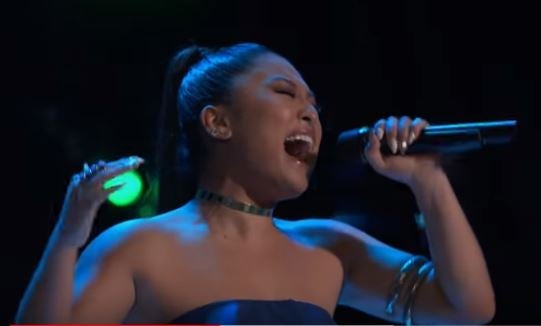 The 20-year-old Filipino-American singer Radharani Martinez, professionally known as RADHA, blew the judges of “The Voice” away during her blind audition in the show on Sept. 24.

RADHA, who emerged on stage wearing a blue jumpsuit, wowed judges Maroon 5 frontman Adam Levine, Kelly Clarkson, Jennifer Hudson and Blake Shelton when she belted out to Jessie J’s “Mamma Knows Best” — a performance that was deserving of all its glimmering feedback, and more.

Levine was the first to turn his chair for RADHA after he found himself immediately mesmerized and struck by her powerful performance. Throughout her song, Hudson and Shelton can be seen talking among each other as they both found themselves torn whether they should already turn their chair for her or not.

By the end of her performance, all four judges have turned their chairs. Meanwhile, RADHA looked overwhelmed and moved by the results. Levine, it appeared, blocked Hudson so she wouldn’t be able to take RADHA into her team, making it known that he wants the young powerhouse singer under his wing.

“First of all that beginning threw me back so far into my chair that I didn’t know if I was gonna be able to get back up again,” Levine told RADHA in awe. “And then I pressed because I’m not an idiot, but then I got scared so who am I gonna block? Kelly or Jennifer?”

Levine continued to say, “Honest to God, I was so amazed by you. The way you performed, the control, the maturity, you omit this amazing vibe when you sing. This is absolutely the era of the female and I’m your guy.”

Hudson, although upset she had been blocked by Levine, told RADHA that she was just delighted to see the likes of her come into the show: “I’m just happy to see a voice like yours make it to a show like this. You outdid yourself, ‘lil sister, I just wanna say that.”

Shelton, too, was nothing short of floored, as he told her they’ve never seen anyone like her vocally kick the door down during blind auditions.

“Unbelievable. People have tried that in the past, they never really carry on through ’til the end of the song and your voice just stayed on point,” Shelton told RADHA. “That’s why I held back… You should pick me as your coach because Adam has already taken the chance from you to work with Jennifer freaking Hudson.”

Despite the bickering between Shelton and Levine, RADHA eventually chose the Maroon 5 frontman as her coach. “I pick Adam,” she said, much to the joy of Levine.

RADHA is a first-generation American, as her parents emigrated from the Philippines to the United States to give their family a better life. She learned how to read and sing through karaoke, as per NBC, with karaoke being big in Filipino culture. Today, she is a full-time honor student at Montclair State University in New Jersey while pursuing her dreams of becoming a songwriter. JB