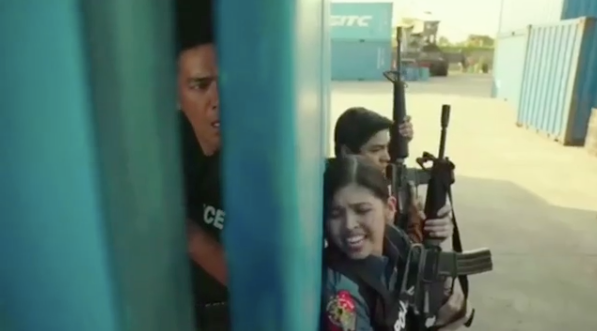 Mendoza posted the trailer via Twitter yesterday, Oct. 15. She also ended the speculations on who among them will play the roles of Jack, Em and Popoy in the film.

(This is a first! The combined forces of Coco Martin as Jack, myself as Em and boss Vic as Popoy! Coming this Christmas! “Jack Em Popoy: The Puliscredibles”.)

In the trailer, Martin proved once more why he is one of the most popular action stars of this generation, as he showcased his motorcycle riding skills to chase a thief, to the surprise of the police uniform-clad Mendoza.

Helping out Sotto in packing the film with madhouse humor are fellow comedians Jose Manalo, Wally Bayola and Paolo Ballesteros.

While the action and comedy aspects of the film are to be expected from its cast, “Jack Em Popoy: The Puliscredibles” also offers a hint of romance. There seems to be a love-hate relationship going on between the characters of Martin and Mendoza, which fans can also look forward to in the film.

“Jack Em Popoy: The Puliscredibles” serves as Sotto, Mendoza and Martin’s first film together as a comedy trio, and is directed by Mike Tuviera. It is slated to hit theaters on Dec. 25. JB

Vic on his connection with Maine: We’re both quiet and shy

Is Coco Martin willing to guest on ‘Eat Bulaga’?