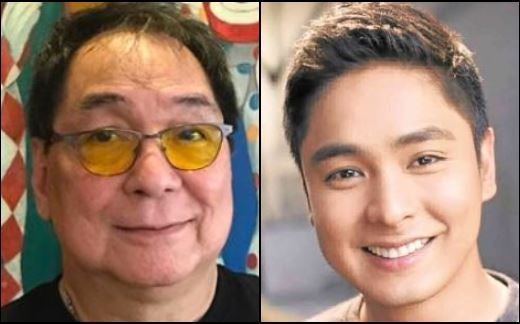 When Joey de Leon turned 72 yesterday, Oct. 14, actor Coco Martin was one of the people who had a special heartfelt message for the funny septuagenarian.

De Leon marked his 72nd birthday by bathing in the rain, a sight that he shared to his fans. In his Instagram post, de Leon can be seen wearing a black “Eat Bulaga” shirt and shorts while standing near the pool of what looked to be the backyard of his home.

“Yeah! Happy birthday to me, alright,” de Leon said in the video as he stood in the pouring rain.

He shared to his fans that it often rains during his birthday, writing, “Madalas umuulan pag birthday ko (It often rains on my birthday). Thank you God for your blessing.”

Martin then took to de Leon’s Instagram post, where he wrote a moving letter, first wishing the comedian a happy birthday before expressing his debt of gratitude. 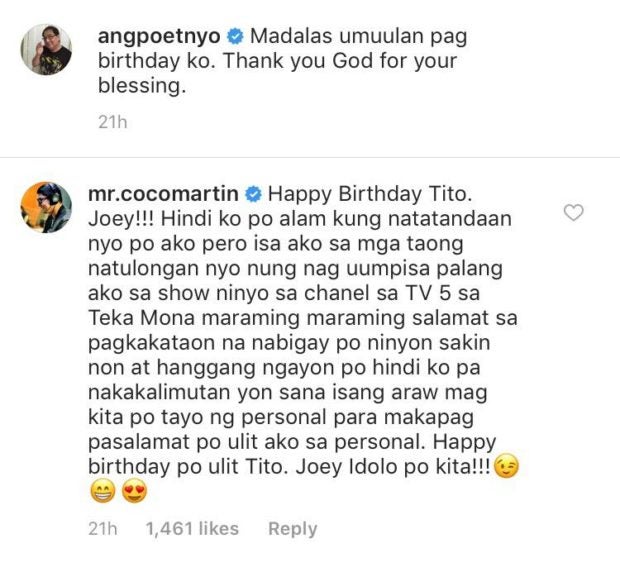 It almost seemed absurd for a huge star like Martin to be unknown to de Leon, but Martin, being humble and modest, thanked de Leon for all that he has done for him. He also expressed his wish to meet de Leon personally one day so he can thank him.

(Thank you very much for the chance you gave me then. I have not forgotten to this day. I hope one day we could meet up, so I can thank you personally. Happy birthday again, Tito Joey! You are my idol.)

De Leon, meanwhile, replied to Martin and told him that he was proud of him.

But it seems there’s no need for de Leon to remind Martin of being humble, as he has always remained so. Martin, who is now one of the biggest actors of ABS-CBN, has continued to pay forward the blessings and goodwill he has received during his early years in showbiz, by helping out now fellow actors in their careers.

Martin, last August, extended his help to former child actor CJ Ramos after being released, following a drug buy-bust operation in July. Martin gave Ramos the chance to star in his top-rating action series “Ang Probinsyano” to support him in starting anew.

Martin also did not fail in helping singer-actress Mystica in her showbiz comeback when he heeded her request to allow her to join “Ang Probinsyano”, so she could also get her life back on track. Martin went beyond her request and also got Mystica’s husband, Troy, into the show.

Martin is definitely no stranger to hardship, sharing back in August that he used to drive a tricycle
just so he would have school allowance.

([Ever since], we have been working hard through life. When I was still studying in college, I used to drive a tricycle so I could earn my allowance for school.) JB