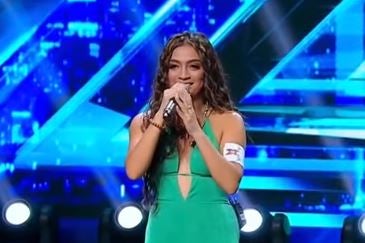 One Filipino wowed the judges of “The X Factor Romania” recently with a performance that showed them she’s got what it takes to be a singer. Her performance was shared on Facebook by “X Factor Global” last Sept. 18 and has since garnered almost 5 million views.

In the video, Bella Santiago, who is based in Bucharest, Romania, looked every inch a superstar and not a contestant when she emerged on stage wearing a daring green jumpsuit.

Santiago sang her own rendition of “Bang Bang,” the pop banger that saw Jessie J, Ariana Grande and Nicki Minaj come together to showcase their different musical styles.

Judges Stefan Banica, Jr., Delia Matache, Horia Brenciu and Carla’s Dreams were stunned with Santiago, with Carla’s Dreams cursing at one point in the video. Banica, on the other hand, compared Santiago to Beyoncé while Matache couldn’t help but stand up from her seat to dance to Santiago’s performance.

Santiago also gave her own soulful take on Jessie J’s “Burnin Up” before switching back to “Bang Bang” where she impressed the judges and audience even more when she rapped Minaj’s part.

It was a performance that was deserving of its acclaim, as all the judges gave Santiago a standing ovation and a bow.

Before her appearance in “The X Factor Romania”, Santiago joined It’s Showtime’s “Tawag ng Tanghalan” back in 2016 where she performed Beyoncé’s “Crazy In Love.”