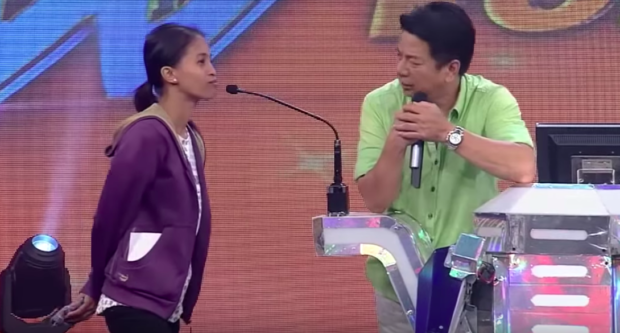 Variety show “Wowowin” featured teenage mothers on its “Pera o Kahon” segment during its episode on Friday, Oct. 12. But one contestant, Jona, drew more attention not so much for her talent in singing but because she revealed that she was impregnated at the age of 13 by a 30-year-old church lector.

The official YouTube account of Wowowin uploaded the video of Jona and her partner, Manny, last Saturday, Oct. 13.

Jona revealed she already has four children with Manny and that her parents are aware of their relationship. She said she met Manny while they were both serving their church — he was a lector while she was a choir member.

(Why were you attracted to that age? You were thirteen back then.)

“Ma-boka po kasi Kuya Will e! (Because he was a smooth talker Kuya Will!)” Jona replied.

Apparently, despite being together for nine years, the two has yet to tie the knot.

“Kita mo yan, lector pero ayaw magpakasal (Look at that, he is a lector but he doesn’t want to get married),” Revillame chastised.

(We were both young Kuya Will when we decided to live together, and because we have four children now, it’s hard for us to get married, because we don’t have a budget.)

Revillame insisted there are ways to get married without breaking the bank, such as joining the “Kasalang Bayan”.

Meanwhile, Manny divulged he had his eyes on Jona since she was 12-years-old.

(Do you know, when you were only 12 years old, when you showcased your talent in singing, [that was when] I fell in love with you. That’s why way back then, I was already guarding you.)

(One of the trials we experienced was being negatively looked at by our baranggay, because I was a member of the church [when I fell in love with a minor]. But despite all that, I still pursued you. I faced it all because I was single anyway, and I had good intentions towards you.)

But the episode did not sit well with netizens who called Manny a “pedophile.” Outraged commenters said that the huge age gap would not have mattered if both were adults when they started their relationship.

([Manny] is a pedophile because Jona was underage when they had sex. Don’t reason out that age doesn’t matter! Bullsh*t! You are all disgusting! And don’t rationalize that Manny had been responsible for looking after Jona! He and Jona’s parents should answer to the law!)

Other commenters on Twitter expressed their disappointment on the show for featuring Jona and Manny’s story.

Another YouTube commenter went as far as to suggest that netizens boycott the show for allegedly promoting pedophilia.