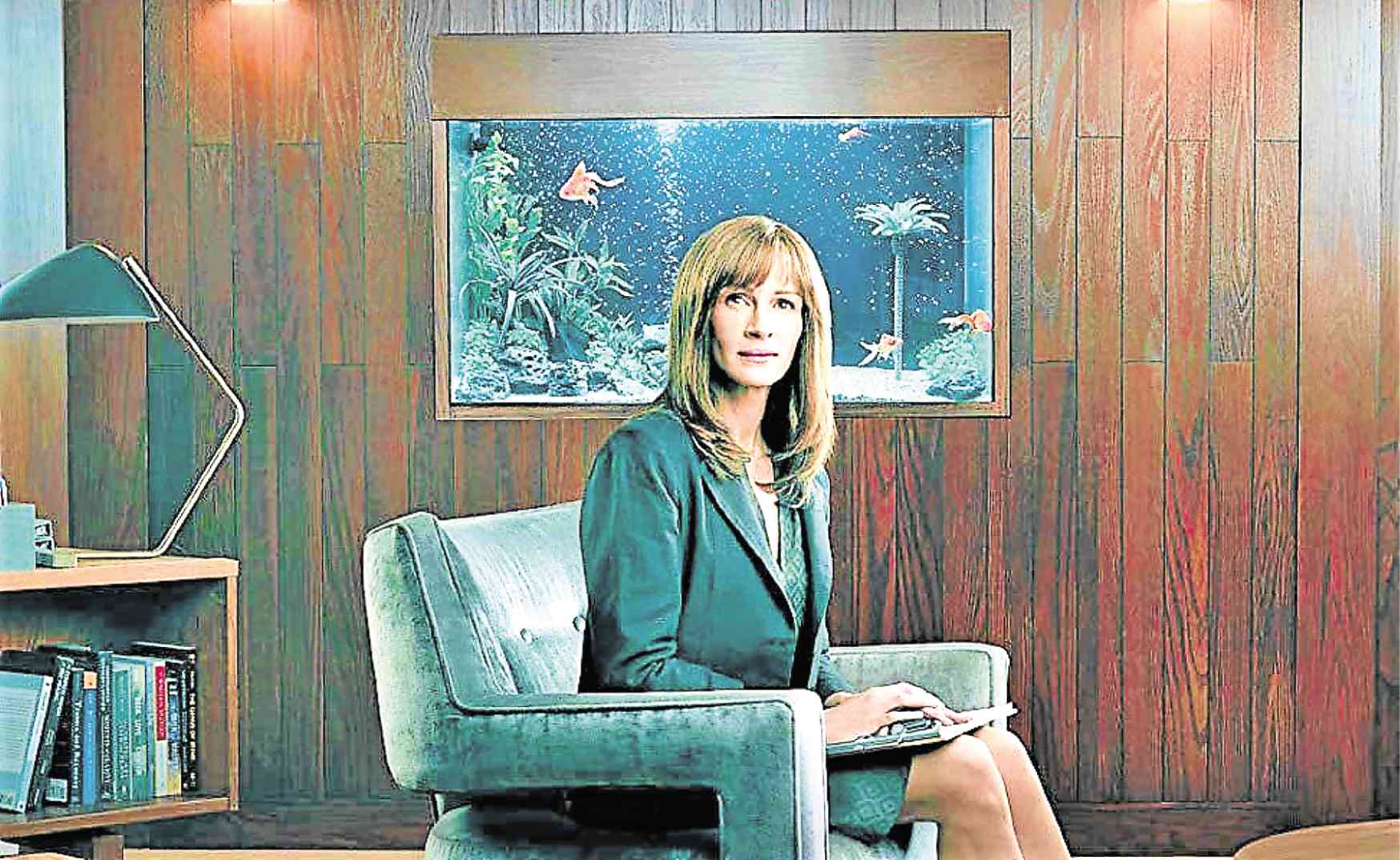 Julia Roberts is a caseworker at a secret US government facility in the new TV series, “Homecoming.” —AMAZON STUDIOS

LOS ANGELES—“I didn’t quite realize how surreal it would be,” Julia Roberts said about watching the Broadway musical version of “Pretty Woman,” the movie that launched her to stardom in 1990. “They did a great job. It’s a great show, and everyone in it is very good.”

Added the actress about the musical retelling of her hooker-with-a-heart-of-gold blockbuster (which costarred Richard Gere and was directed by the late Garry Marshall): “And it was fun. My cheeks hurt at the end of the show from smiling. But I didn’t realize how strange it would be to hear people saying things on a Broadway stage that once upon a time, we just made up to fill some space in a scene. We made up so many things while making that movie.”

The A-lister recalled, “We were just constantly trying new lines and different jokes to make Garry Marshall laugh. And it was very strange to hear those things on a Broadway stage. And it just made me miss Garry so much.”

Julia went backstage after the show to congratulate the cast, including Samantha Barks, who has the star’s Vivian Ward part on Broadway. Samantha played Eponine in the film version of “Les Miserables.”

Since becoming a major talent in the 1990s, Julia has evolved into a well-respected actress. In her first lead TV role, Julia is brilliant in Amazon Studios’ “Homecoming,” directed by Sam Esmail (“Mr. Robot”) and based on the original podcast series of the same name created by Eli Horowitz and Micah Bloomberg.

Julia plays Heidi Bergman in the psychological thriller set both in 2018 (Heidi works as a counselor/therapist in a secret US government facility treating soldiers returning from war) and 2022 (something has gone wrong and Heidi works as a waitress in a cheap restaurant). Bobby Cannavale and Stephan James costar.

Julia plays a mom, Holly Burns, who welcomes the return of her drug-addicted son Ben (Lucas Hedges) one Christmas Eve in the drama, “Ben Is Back.” Both Julia and Lucas are terrific. The movie is written and directed by Peter Hedges, the real-life dad of Lucas, the rising young actor whose impressive credits include “Lady Bird,” “Three Billboards Outside Ebbing, Missouri” and “Boy Erased.”

The 50-year-old and her husband, cameraman Daniel “Danny” Moder, have three kids.

Was it a big decision to make a TV show? I didn’t really make a decision to make a TV show. I had been sent this podcast long ago. I listened to it. I wasn’t very familiar with podcasts then. I certainly had never heard one that had a story like this. To me, it just seemed like an old-fashioned radio play, that you’d sit around in the living room and listen to a story.

By the time I got a call about it next was from Sam Esmail. While he has made incredible content for television, I didn’t necessarily assume that would be what he wanted to turn this into. We had this incredible conversation.

At the time, it wasn’t so much about if it would be a TV show. It was just a creative conversation of, did we both like this in the same way and were we intrigued by it? And it took off from there. So it’s more … [because] I picked to be with Sam than I picked to make a TV show.

In real life, do people tend to go to you and ask for advice? In my circle of friends I would be considered one of the main advisors, yeah. And I take that very honorably.

One fascinating thing about “Homecoming” is that we get to see your character in two different periods of her life. Did you shoot them separately? It was tricky. I had to definitely stay on top of it. There were only a couple of days that I was both Heidis in one day. So I usually was just one Heidi a day. That was what I could manage.

It starts at the diner unexpectedly. And I thought, is that really how it started when I read it? So I would rely on Sam to remind me.

Now switching to “Ben Is Back,” did you realize how challenging this role would be?  It’s the challenge that makes you want to do it. But like anything, you don’t really know how hard it will be until it’s the middle of the night, it’s 23 degrees below zero and it’s just Lucas and me standing there, staring at each other, wondering if we might die.

Then you think, I never really thought of the physical challenge of prevailing in these dark, cold nights.

For me, what was of the greatest value ultimately was that I had made a concentrated effort to get Lucas and Kathryn into my house before we started filming. So that we all had a clear sense of each other and a comfort with each other.

I knew once we started filming that we weren’t going to have the luxury of time in that same way. I just respect and adore both of them so much and so completely, I can’t imagine going through this story with any other actors to play my two older children. It was extraordinary for me.

Lucas Hedges brought such intensity to the movie. Can you talk about the energy that you two worked off? I honestly couldn’t say enough about Lucas as a person, as a young man, as an artist. He is utterly devoted. He was fantastic.

I’m watching him this close to me all the time. You can see everything a person is doing. I was just completely and utterly impressed.

And he’s also a hell of a nice guy, just sweet. He’s got his feet on the ground, his intentions are very secure. I adore him, I really do.

Does playing the mother of a son who has a serious drug problem make you think about your own children’s future? I don’t think about that. If you apply all the many nightmares that any parent could apply to life in this world, you’d lock the doors and never leave the house. So you really do have to concentrate on just all the positive, optimistic things of the world and hope that those carry you and your  family through, intact.