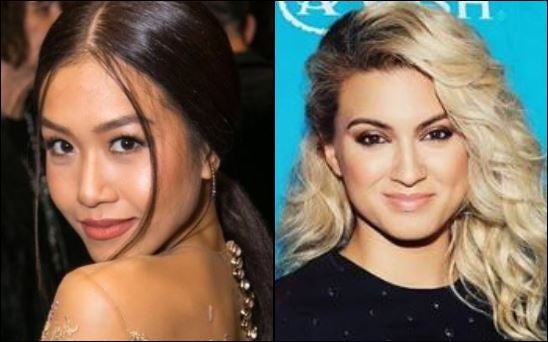 Rachelle Ann Go couldn’t help but fangirl over Hollywood singer Tori Kelly when the latter gave her a shoutout on social media recently. Go is currently in the United Kingdom for the London production of the highly acclaimed tour de force “Hamilton,” wherein she stars as Eliza Hamilton.

Go took to her Instagram on Sept. 25 to share a video of Kelly sending her gratitude to Go for helping them get in the “Hamilton” show. In the video, Kelly can be seen inside a car with husband  André Murillo, who also extended his thanks to Go.

“It’s TORI KELLY!!! I am such a fan @torikelly, you are such an inspiration,” wrote Go. “Thank you for being a light! Ps. I really want to sing with Tori guys… so pls pray with me! Lord please make it happen hehe.”

Kelly, too, only had praises for Go. After thanking her in the video, Kelly congratulated her for her achievements in London and also hoped to one day meet her.

“Rachelle, it’s me Tori… Saw ‘Hamilton’ finally,” said Kelly in the video. “We just wanna thank you for just connecting all of that and helping out getting us in we loved it and we were just freaking out the whole time.”

“Hopefully we get to meet at some point,” Kelly added. “Congrats on everything and being out there in London and killing it. You’re awesome.”

Despite being a force on her own, Go has never let her glimmering milestones in the world of Broadway get ahead of her her. She often fangirls over the celebrities who come and watch “Hamilton,” taking pictures with them and gushing whenever she shares them on social media.

Last month, Go found herself starstruck when she met the Duke and Duchess of Sussex, Prince Harry and Meghan Markle, after they visited the set of “Hamilton” at London’s Victoria Palace Theater. For Go, it was definitely an “out of this world”  fangirl experience.

In July, Go was also ecstatic upon meeting Hollywood actor Benedict Cumberbatch. She shared then that it was an honor to meet Cumberbatch and was in awe of him for his utter humility.  /ra