What looked like a fun tourist picture for Diego Loyzaga was met with roaring disapproval by netizens.

On Sunday, Sept. 23, Loyzaga shared a picture on Twitter of himself with a lion named Shawn, who lay locked up in chains while the actor petted his mane.

Netizens replied to express their dismay that the lion was shackled.

(The lion is pitiful… instead of freely roaming the jungle, it is chained and this person took a picture with it…)

(Imagine you’re locked up with those many chains.)

The actor clarified in a post on Monday, Sept. 24, that the lion was tied down. He identified the location as Baluarte Resort and Mini Zoo in Ilocos Sur, which is owned by former Ilocos Sur Gov. Chavit Singson.

“This guy is allowed to roam free in a huge area where he can play and not restrained. He’s used to being around humans since a cub. Sobrang lambing (Very affectionate) and likes playing with humans.. i was lucky enough to be his [playmate]. The only reason why he’s got chains on him is for safety purposes. Believe me when i say he’s a happy and very well taken care of Lion,” wrote Loyzaga.

He added: “He was yawning. Apparently he likes head massages haha.”

While comments on Instagram were more positive, others on Twitter couldn’t be swayed into believing that chaining animals was acceptable. @heyyuGert on Twitter said, “Still, a lion restrained and ‘free to roam around a zoo’ is pitiful.” 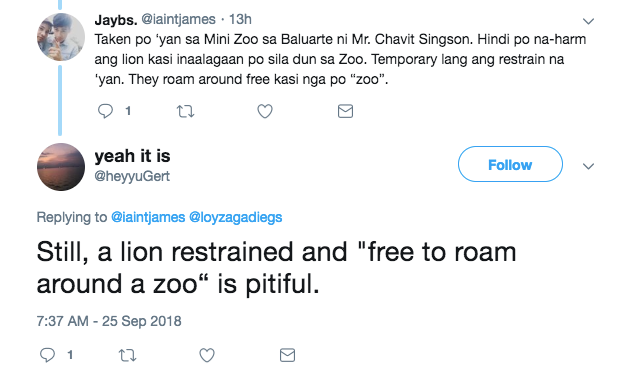 The zoo in Vigan is home to wild animals, both alive and dead. Singson said in an August 2016 interview with Manila Standard that he initially set up the destination to show off his hunting collection.  /ra