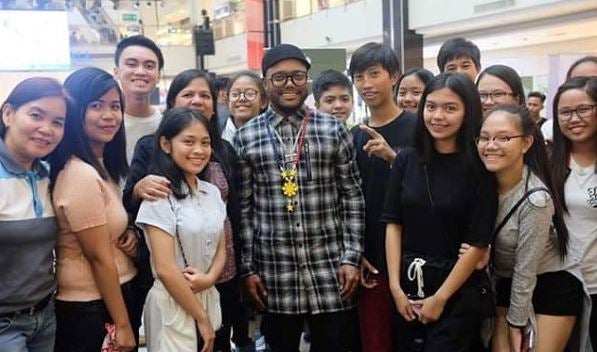 It’s a heartwarming sight that despite the multiple Grammy Awards, countless of hits and worldwide fame, Apl.de.ap of the beloved hip hop group Black Eyed Peas still stays true to his Kapampangan roots.

Apl.de.ap, born Allan Pineda Lindo, has always been open about his humble beginnings, growing up in a remote barangay in Angeles City where he helped his grandfather plant and sell crops, and look after their carabao.

He was born clinically blind and got treatment for his eye condition at the United States, thanks to the Pearl S. Buck Foundation. At 14, he left his hometown of Angeles City for another city of angels, this time Los Angeles, California where he resided with Joe Ben Hudgens, his sponsor and eventually adoptive father.

These days, Apl.de.ap is paying the goodwill forward, as he returned to Pampanga earlier this year to contribute something to the country’s creative industry. Through his namesake foundation, Apl.de.ap is now using his resources and influence to advocate for and groom the creative scene.

The initiative, called the Creative Innovators Programme, has since come to fruition with the help of the British Council, Thames International Business School and the Department of Trade Industry. Apl.de.ap will be providing 20 scholarships to college students, and 20 more slots for professional diplomas to working professionals every year, for the next five years.

Recently, Apl.de.ap took to his Instagram account to share to his fans that he is in the country, by posting a group picture with his scholars.

Apl.de.ap arrived in the country over the weekend for the mentorship event of Mentor Me On Wheels. The event was held last Sept. 7 at the Marquee Mall in Angeles City and offered one-on-one mentorship from professionals of various fields in the creative industry such as music, film, photography drama, publishing and graphic design, among others.

Last Sept. 8, Apl.de.ap shared on his Facebook page a photo of him mentoring a young individual during the event.

“It was great to provide some mentorship on how to make it in the music industry,” wrote Apl.de.ap. “It was even more great to see Pampanga again. Let’s use creativity to build a better Philippines!”

It was great to provide some mentor ship on how to make it in the music industry. It was even more great to see Pampanga again. Let’s use creativity to build a better Philippines! #cpo #creativity #design

Apl.de.ap also paid homage to his mother, Cristina, who raised him and his six younger siblings as a single mother, when his African-American father deserted the family after his birth.

“Being home means getting to see Mom,” wrote Apl.de.ap.

Philanthropy isn’t something new to Apl.de.ap. In the past, he partnered with one of the top children’s hospitals in the United States to help save infants from blindness. He, too, has donated medical equipment to the Southern Philippines Medical Center in 2015 to better help in diagnosing eye conditions among newborns.

“I am legally blind that’s why this campaign is very close to my heart,” Apl.de.ap shared then.

Aside from his charity, Apl.de.ap also champions Filipino culture abroad. Last 2016, Apl.de.ap paraded the iconic Sarao jeepney in New York City to celebrate Philippine Independence Day, much to the joy of fellow Filipinos in the Big Apple. JB

Apl.de.ap honored for helping save preemies from blindness

Apl.de.ap on owning a Jollibee store: ‘A dream come true’