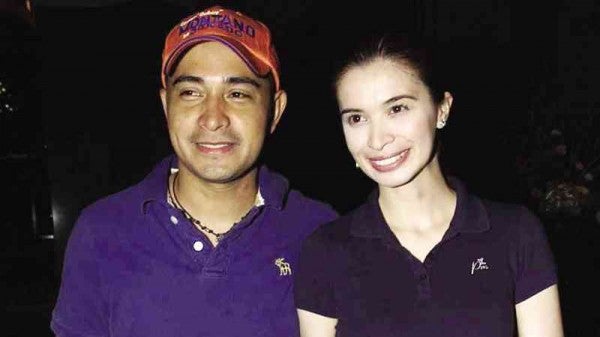 CESAR Montano and Sunshine Cruz. His sister hopes they can settle differences discreetly.

Yesterday Mercedes took to the comment section of the Facebook page “Tres Maria” to lambast Cruz for publicly voicing out her disappointment over Montano’s alleged failure to comply with the court order on providing child support for their daughters. Following Mercedes’ footsteps, Allary commented about her own sentiments on the said Facebook page.

“Lokaret Ched, [these] are some of your messages to me remember? Ang galing mong mag-fabricate ng stories, siraan ang family namin! Ikaw ang plastic!” Allary wrote in the comment section. “Here, you clearly admitted yourself what kind of brother you have. [Sa’yo] mismo nanggaling! Yes, lokaret ka talaga. ‘Wag ka magmalinis, cause we all know you are not!”

(Crazy Ched, these are some of your messages to me remember? You are so good at fabricating stories and slandering our family! You are the phony one! Here, you clearly admitted yourself what kind of brother you have. It came from you! Yes, you really are crazy. Don’t act like you’re clean, cause we all know you’re not!)

“I will face you anytime you want, just name the time and place,” challenged Allery. “Lakas tama mo! (You really are crazy!) Well, it does run in your family!”

Allary then uploaded in the comments section screengrabs of Mercedes’ alleged message on Jan. 17, 2013, highlighting parts of the message. Mercedes supposedly used the Facebook account named “Marimer Hamilton” in the conversation.

“By the way, Shine isn’t feeling very well now and am pretty sure you know and that’s due to my brother’s extra-conjugal activities,” Hamilton wrote, which Allary highlighted.

“We all have to pray together to save their marriage and for her to remain happy as if they’re happy their kids are happy as well,” remarked Hamilton in an unhighlighted part of the message.

In another highlighted part, Hamilton said: “They really need prayers especially my brother. I’m sure you know that Filipino men, by nature, regardless of religion get snared by the devil quite easily at sa totoo lang babaero sila halos lahat (and truth be told, they all are womanizers).” 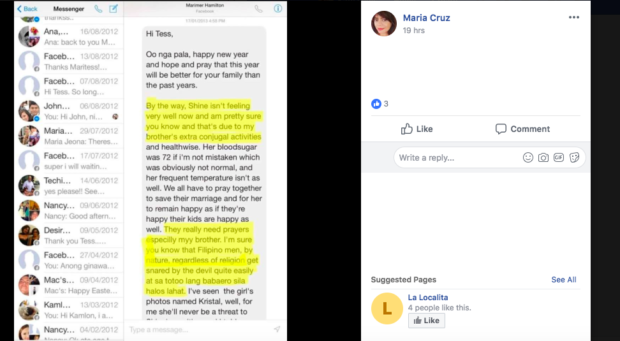 The message mentioned (although not highlighted) Montano’s alleged mistress, a woman named “Kristal.” It is worth noting that Montano had been linked to starlet Krista Miller during the year the message was supposedly made. “I’ve seen the girl’s photos named Kristal, well, for me she’ll never be a threat to Shine’s position and I told your sister this,” Hamilton remarked.

“All I ask is for us to pray hard for them in order for my brother to get out of that vice,” the last highlighted part stated. Interestingly, although the name of the account was “Marimer Hamilton,” the message was signed “Ched.” This was stressed by Allary by encircling it.

(You want more? Who do you think you are? All you ever do is invent stories and hide under fake accounts! You’re embarrassing! Why is it you like to meddle [with other people’s affairs]? Let’s go, the two of us! I’ll take you on anytime, crazy!)

Meanwhile, Mercedes and Montano have yet to comment or issue a statement, as of this writing. JB

Read Next
LOOK: Bea Alonzo graduates from baking course
EDITORS' PICK
High inflation: Your P1 is now worth only 87 centavos
UK’s Boris Johnson will resign, BBC reports
High-risk pregnancy: Reducing your risk is in your hands
Geek out at TOYCON 2022 powered by Smart Signature
House energy committee chair Arroyo bats for cheap electricity
Unemployment rate up to 6% in May
MOST READ
Suspect in grisly killing of missing woman in Bulacan arrested
Kim Atienza’s daughter flaunts bikini body in response to critics of her ‘revealing photos’
Japanese artist who created ‘Yu-Gi-Oh!’ found dead in the sea
UK PM quits as Conservative leader
Follow @KMatrianoINQ on Twitter
Don't miss out on the latest news and information.