Apl.de.ap honored for helping save preemies from blindness

LOS ANGELES – As premature babies fight for life, many of them also face the risk of losing their eyesight if they don’t get the proper diagnosis and treatment.

Apl.de.ap, the Filipino-American member of Grammy award-winning group The Black Eyed Peas, has partnered with one of the top children’s hospitals in the United States to help save these babies from blindness.

READ: Apl.de.ap on a mission

The center unveiled Pineda’s spot on the hospital’s celebrity charity wall, making him the first Filipino to have his name emblazoned on the wall alongside top celebrity donors, including Grammy award-winning British singer Seal and the basketball team Los Angeles Clippers. 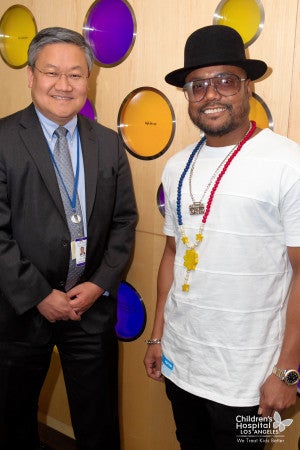 Pineda, who has an eye condition called nystagmus, is legally blind. Raised by an impoverished single mother in Angeles, Pampanga, he struggled with visual impairment throughout his childhood.

“I had difficulties going through school. I couldn’t see the blackboard,” he said. “Imagine being blind growing up in the Philippines. It’s ten times harder. So we really need to help these children.”

To help premature babies, Pineda’s Apl.de.ap Foundation International has partnered with distinguished pediatric eye surgeon, Thomas Lee, and his team of experts in the renowned Vision Center at CHLA.

Lee said two-thirds of premature babies in neonatal intensive care unit will have some form of retinopathy of prematurity (ROP) and face the risk of going blind. Of those, 10 percent will go blind if they’re not diagnosed and treated.

“The numbers are quite staggering, and it’s estimated that up to 20,000 children in the Philippines will be at risk per year,” Lee told reporters.

The Philippines ranks second in the number of premature births in Southeast Asia and eighth worldwide, statistics show.

Many hospitals and physicians in the Philippines lack the training to diagnose the disease afflicting premature babies who don’t have properly formed blood vessels in the retina, the eye’s innermost layer. 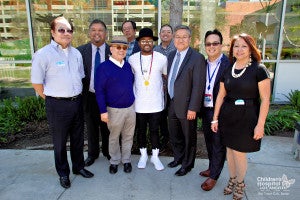 If not treated within 48 hours of diagnosis, the baby will become permanently blind.

Sonia Delen, chair of the Campaign for Filipino Children, Apl.de.ap Foundation International’s health initiative, said they have provided a retinal imaging system called RetCam to a Philippine hospital and will soon donate two more. The RetCam is used to screen for ROP to prevent blindness.

Delen said their partner, the Philippine Academy of Ophthalmology, has trained more than 60 doctors in the screening, diagnosis and treatment of ROP.

The campaign has estimated that training at least six to ten medical practitioners in four hospitals will help save approximately 4,380 babies from blindness caused by ROP every year.