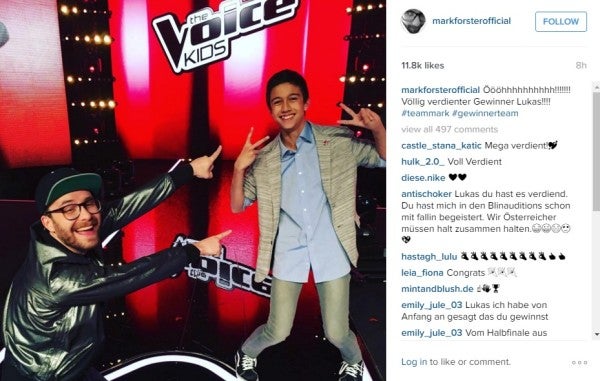 A Filipino-Austrian teenager was declared the winner of “The Voice Kids Germany” on Friday.

During the show’s finale, 13-year-old Lukas Janisch wowed the judges with his performance of Alicia Keys’ “If I Aint Got You” and Adele’s “When We Were Young” while he was playing the piano.

Janisch got a standing ovation from the three judges and the audience.

During his blind auditions, Janisch also got a standing ovation after performing Alicia Keys’ “Fallin” while also playing the piano.

Janisch chose Mark Forster to be his coach over Lena Meyer-Landrut and Sasha Alexander.

Janisch, who confessed to growing up singing karaoke with his mother, beat out fellow finalists Shanice and Ridon.

Being the grand champion, Janisch will bring home 15,000 euros worth of training and recording deal.

Janisch’s family lives in Fürstenfeld, Austria but her mother hails from Palompon town in Leyte. NC/IDL