Erwan Heussaff goes on a gastronomic journey to Mindanao 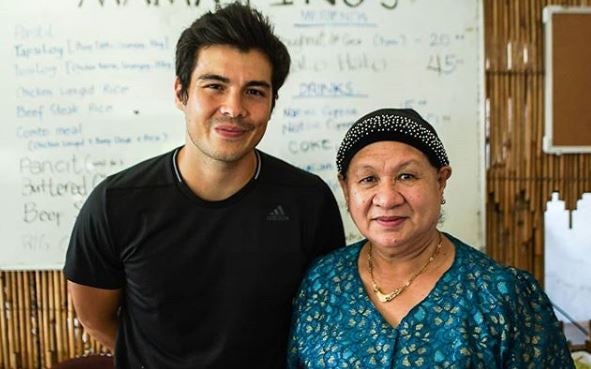 Erwan Heussaff recently made his way to Mindanao where he reveled in the beautiful sights and delicious eats of the Autonomous Region in Muslim Mindanao (ARMM).

Heussaff took to his Instagram last July 26 to share an aerial picture of the magnificent structure of the Sultan Bolkiah Grand Mosque in Maguindanao.

“Spent some time in the majestic Sultan Bolkiah Grand Mosque in Maguindanao, after going around Cotabato City,” wrote Heussaff, praising the place for its beauty.

“Such a beautiful location that embraces you with a veil of peace, once you step onto its cold stone floors.”

Being the ultimate foodie and experimental chef that he is, Heussaff made sure to sample the heritage treats around the area. On the same day, Heussaff shared a picture of pastil in a bilao, a native Maguindanaon delicacy.

“Pastil all day every day in Maguindanao. This one was filled with beautifully cooked rice and shredded chicken. Just like an onigiri but with banana leaves instead of seaweed and in a long shape.”

Heussaff also learned how to cook tinapayan, an indigenous fermented fish, from scratch in Cotabato City. He shared a picture with Babu Ping, the woman who showed him the works.

“Babu Ping taught me how to make Tinapayan from scratch,” wrote Heussaff. “It’s a dish that takes a long time to make and that requires lots of love.”

Heussaff explained the meticulous and time-consuming process of making tinapayan.

“After catching the mud fish, it needs to be sun dried for 3 days, before being smothered by Tapay (overnight fermented rice in a banana leaf), once the Tapay covers every morsel of dried fish, it’s placed in a container and left to ferment for an additional 7 days.”

“All of this is then fried in oil and is delicious in all its funky flavours when mixed in with copious amounts of white rice. Such a proud heritage recipe to have,” he added.

Apart from the tinapayan and pastil, he also tried tinagtag, “very thin rice and sugar spun and fried like vermicelli noodles and shaped in a cylinder.”

Apang, a version of puto, was also in the picture.

“Made from fermented soaked rice, sugar and coconut,” Heussaff said of the apang. “Delicious.”

On July 2, Heussaff had a change of clothes and wore a traditional Maguindanaon garb in a picture of him surrounded with a group of dancers from Sulu.

“Spot the guest amongst the graceful dancers from Sulu,” wrote Heussaff.

After meeting the Sulu dancers, he shared another foodie post on July 28 for his fans. “Everyone we asked, recommended having barbecue on this famous street in Cotabato City,” said Heussaff as he showed a picture of skewered grilled chicken.

“I didn’t understand why, until I bit into this simple and juice grilled native chicken served with a white sauce filled with magic (7up, coconut cream, sugar, salt, vinegar).”

Meanwhile on August 2, Heussaff shared a short video clip of him making the tinapayan with Babu Ping. Heussaff seemed to struggle with his frying technique, as Babu Ping joked in the video that he would give him a grade of 1, with 1 being the lowest and 10 the highest.

“Babu Ping and I discussing how bad my flaking while frying technique is.”

The full video of Heussaff making tinapayan may be viewed below.  /ra