Could ‘Frasier' be returning to TV? | Inquirer Entertainment

Could ‘Frasier’ be returning to TV? 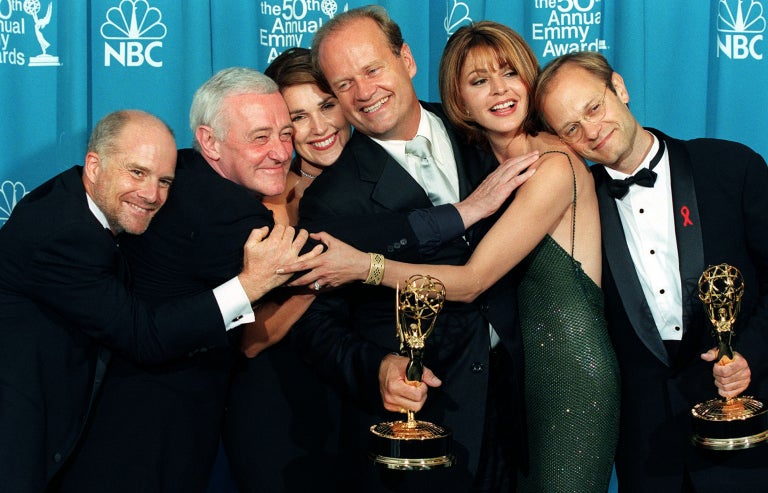 Kelsey Grammer won the Emmy Award for Lead Actor in a Comedy in 2004. Image: AFP/Kim Kulish

With “Charmed”, “Will & Grace” and soon “Buffy the Vampire Slayer” back on the small screen, the cult 1990s sitcom “Frasier” could be the latest show to return to United States TV. The show’s title star, Kelsey Grammer, is reportedly discussing ideas for a potential reboot with CBS TV Studios.

For the moment, Kelsey Grammer, who played the show’s lead character, Frasier Crane, is discussing various concepts to revive the series or to reboot the show with new characters, albeit still with links to the original.

“Frasier” followed the life of the psychiatrist, Frasier Crane, as he returns to his hometown of Seattle to host a radio talk show. His disabled former-cop father soon moves in, with his dog, and Frasier’s fastidious brother Niles is always on hand for a dose of sibling rivalry.

If the talks progress, “Frasier” would join a long list of U.S. TV shows currently being revived and rebooted, such as “Will & Grace”, which returns this fall for its second reunion season on NBC, or “Sabrina the Teenage Witch”, returning soon on Netflix. Things turned sour for ABC’s freshly revived classic, “Roseanne”, when the show’s lead actress, Roseanne Barr, was fired from the show. A spin-off called “The Conners” has now been ordered, coming to the network this fall.

Recently, news of “Buffy the Vampire Slayer” returning with a black lead hit headlines at this year’s Comic-Con in San Diego. Indeed, the nostalgia for former hit TV series shows no sign of waning in Hollywood. JB