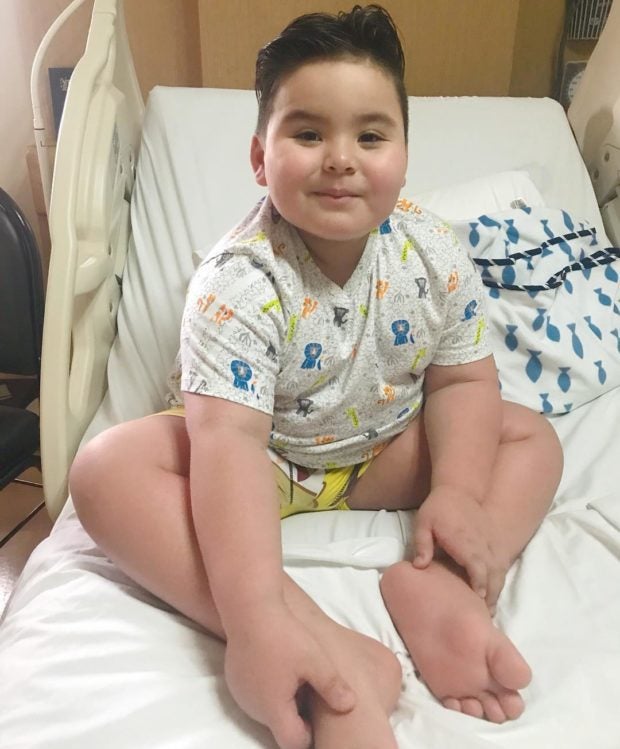 Sebastian Benedict “Baeby Baste” Granfon Arumpac, the youngest host of noontime TV show “Eat Bulaga”, is scheduled to be discharged from the hospital after being treated for dengue.

The official Instagram page of Baeby Baste, managed by his parents, Papa Sol and Mama Shiela, shared a photo of the young host smiling while sitting on his hospital bed yesterday, July 17. Baeby Baste’s parents broke the news of his hospital discharge using the knock-knock-styled joke “Eat Bulaga” is known for.

Baeby Baste was hospitalized on July 10. His younger brother, Samsam, who also had high fever around the time the young host was diagnosed with dengue, was also hospitalized not long after.

His parents said that Baeby Baste was in pain because alongside dengue, he was also experiencing a swelling of his liver and spleen: “It helps a lot sa pain ng tummy ni [B]aste dahil sa complications… namaga po yung liver and spleen [n’ya].”

([Rubbing a Padre Pio token on the young host’s stomach] helps a lot in Baste’s tummy pain; because of complications, his liver and spleen swelled up.)

When Baeby Baste and Samsam were hospitalized, they did not feel too lonely because the young host’s “Eat Bulaga” co-hosts took the time to visit him and his younger brother. Maine Mendoza also previously visited, while Alden Richards gave a video call.

Baeby Baste’s parents have yet to make an official statement on the exact date of the young host’s hospital discharge, as of this writing. JB