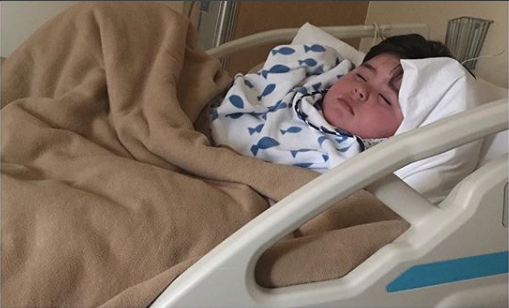 Sebastian Benedict “Baeby Baste” Granfon Arumpac, the youngest host of the noontime TV show “Eat Bulaga”, has been hospitalized as of July 10, Tuesday, due to dengue.

The official Instagram page of Baeby Baste, managed by his parents, Papa Sol and Mama Shiela, shared a photo of the young host sleeping on a hospital bed. Below Baeby Baste’s photo is a screengrab of a text message stating that SamSam, his younger brother, was also experiencing high fever.

(The older brother who doesn’t want to be away from you in the hospital and the youngest son who keeps on looking for you at home because he also has a fever.)

(When you have no choice but to silently cry in the corner [of the room] while the lights are turned off, so that Baste won’t see and hear you, but it hurts.)

(Dear Baste, many are praying for you, for us, so please keep on fighting, boy, don’t be weak. We’ll ask Papa Sol to imprison the mosquito that bit you. Let’s just always pray to Papa Jesus and Padre Pio. Even Samsam now has fever because you’re his idol, so be strong so that Samsam will also be strong and his sickness be gone.)

“Pambansang Bae” and “Eat Bulaga” co-host Alden Richards called to check on Baeby Baste, as shown by a screengrab of the video call posted on the page.

Baeby Baste’s parents have yet to make an official statement on the young host’s condition, as of this writing. JB