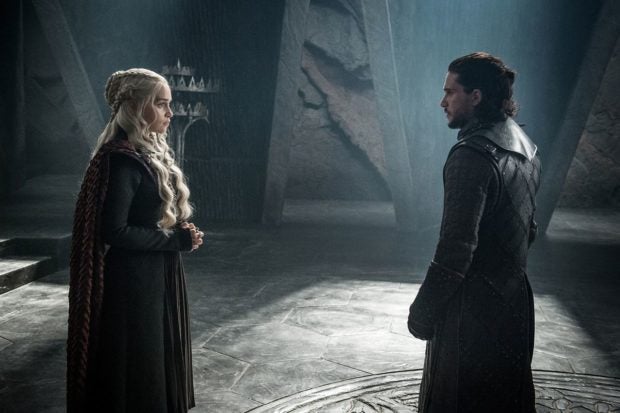 Kit Harington is one of HBO’s “Game of Thrones” stars to reveal his heart-wrenching goodbye to the series.

“Game of Thrones” will premiere its eighth and final season in 2019, after it first hit the small screen in 2011.

On BBC Radio Two, Harington, who plays fan favorite Jon Snow, revealed that he had his last shooting day on July 5.

“It’s just been this amazing journey, and I kind of said to them in my wrap speech that it’s always been more than a job. It’s like they were a family and it was my life,” he shared.

“I’ve loved every minute. I’ve been quite emotional the last week, thinking about having ended — having finished it.”

On June 18, Emilia Clarke revealed that she said goodbye to her “home away from home” as the fiery Daenerys Targaryen.

“Thank you for the life I never dreamed I’d be able to live and the family I’ll never stop missing,” she said on Instagram.

Maisie Williams, who made her mark as Arya Stark, little sister to Jon who has honed her killer instincts while growing up on her own, aptly departed from the show with a post of bloody white sneakers.

“Goodbye Belfast. Goodbye Arya. Goodbye Game of Thrones. What a joy I’ve had. Here’s to the adventures to come.”

She used the hashtag #lastwomanstanding — could this be a spoiler?

Sophie Turner, Williams’ real-life best friend and onscreen sister Sansa Stark, told Digital Spy in a July 10 interview: “It’s like a divorce, or a death in the family, leaving Sansa behind, and leaving people behind.”

It’s been a really strange few months, having everyone wrap in front of us,” she said.

“And it really is like each one is kind of dying off… not in the show this time, but in real life. It’s saying goodbye to someone and being like, ‘God, will I ever see them again?’”

She admitted that she was “bawling” when the director David Nutter bid her farewell from the Winterfell set.

The showrunners David Benioff and Dan Weiss offered a touching memento to actors, which was their character’s favorite scene on a storyboard along with a message. Niña V. Guno/JB