Kris Aquino on Leni Robredo: ‘A leader who will nurture and inspire’ 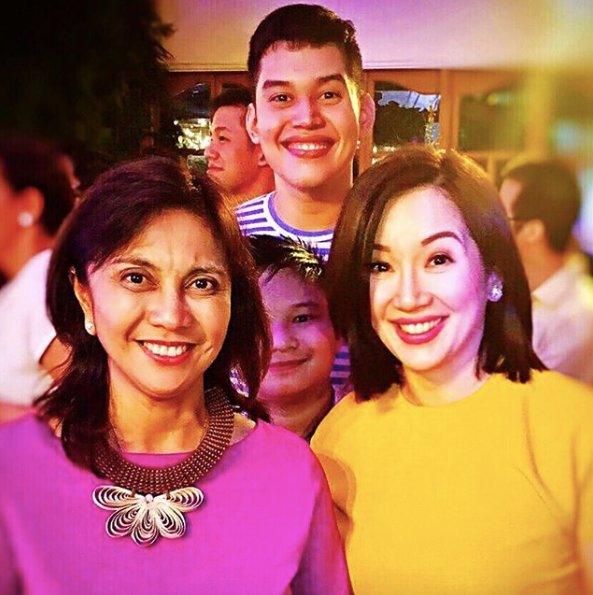 During an Instagram question-and-answer session yesterday, July 11, Aquino was asked by follower @wolfruler8, “Do you think VP Leni is competent to become president?”

The question comes after Duterte said he wouldn’t resign because Robredo would become president. “I don’t think she can ever be ready to govern my country,” he said, adding that she was incompetent.

Another wondered what capabilities the Vice President had. Anjehlo Beredo (@ayeberber) queried, “How well do you know Leni Robredo? What is she good at?”

“I believe you are judged based on your children—she raised 3 exceptional girls—all intelligent, respectful, focused and loving,” said Aquino, who herself is a mother of two.

“We want a leader who will nurture and inspire us—for me she is that.” 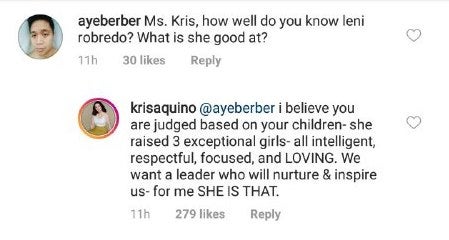 Robredo had much to celebrate this year with her daughters’ academic achievements: Her eldest, Aika, completed a master’s degree in Public Administration in the prestigious Harvard University where she was a scholar. Her middle child, Tricia, is on her senior year at the Ateneo School of Medicine and Public Health. Jillian, the youngest, turned 18 this year and passed admission tests to the University of the Philippines and New York University.

Aquino strongly supported Robredo’s Vice Presidential bid and was touted as the biggest spender for her 2016 campaign.

After Robredo’s win, Aquino said in a May 2016 Instagram post that endorsing Robredo was “personal.” “It was for my mom’s memory,” she explained.

“Apart from my mom, [Leni] is my idol when it comes to being the best mom,” she said.

The late Cory Aquino entered the political sphere after her husband Ninoy Aquino’s assassination. Robredo has drawn comparisons to her: after husband Jesse Robredo’s sudden death in 2012, she ran for her first political post in the 2013 general election as representative of Camarines Sur’s third district, where she beat the matriarch of a political dynasty.

“I believe in her sincerity. I admire her humility. I respect her desire to give true public service with no personal ambition,” Aquino said in a February 2016 endorsement.  /ra