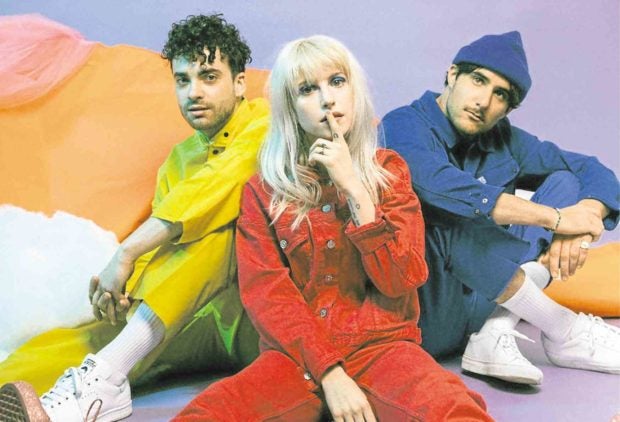 American rock band Paramore, which had to postpone the Manila stop of its ongoing “After Laughter” tour earlier this year, is set to finally take the stage on Aug. 23 at the SM Mall of Asia Arena (call 4702222).

The group was supposed to perform in the country last Feb. 18, but it was forced to cancel only two days prior to the scheduled date. The lead vocalist, Hayley Williams, had contracted a throat and upper respiratory tract infection, and needed to rest to stop it from worsening.

“We have been flying a lot for this tour. Traveling by plane can make it hard to heal because of the dry, recycled air, the extreme altitude, and the fact that planes are basically just flying petri dishes,” an apologetic Hayley wrote on Facebook then.

Paramore gained prominence in the late 2000s for its alternative rock and pop-punk flavored music, which includes such songs as “Misery Business,” “Decode” and “That’s What You Get.”

The show—mounted by MMI Live—will be the band’s third visit to the Philippines, the last one being in 2013.

This time, Paramore is expected to perform songs from its fifth and latest studio album, “After Laughter,” which had the band experimenting and shifting its musical style toward dance and synth-pop. —ALLAN POLICARPIO