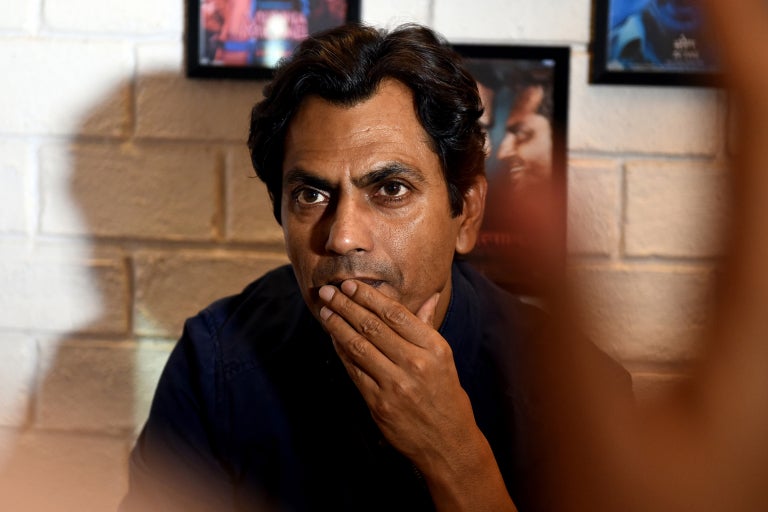 In just over a decade, Siddiqui has gone from a struggling bit-part actor worried about finding food to an acclaimed international star coveted by directors for his versatility across all genres. Image: AFP/Sujit Jaiswal

When Indian actor Nawazuddin Siddiqui walks the red carpet at Cannes, he may take a moment to ponder just how far he has come and where he is headed.

In just over a decade, Siddiqui has gone from a struggling bit-part actor worried about finding food to an acclaimed international star coveted by directors for his versatility across all genres.

“When your film gets selected in a good category, you feel confident that you are on the right track and your choice of films is good,” Siddiqui told AFP.

His latest film sees him play the lead role in “Manto”, a biopic about the troubled life of Indian-Pakistani writer Saadat Hasan Manto. The movie, directed by Nandita Das, has been selected for the Un Certain Regard category of the film festival which opens Tuesday.

“I enjoy Cannes because it is such a big and prestigious platform. It’s a whole world revolving around films,” said Siddiqui.

Manto (1912-1955) is considered to be one of the Indian subcontinent’s greatest ever short story writers. He was lauded for being bold and progressive and a proponent of free speech, writing truthfully about the brutal violence that followed the partition of British India.

To others, he was a subversive troublemaker whose stories featuring pimps and prostitutes broke too many taboos. Manto was charged with obscenity a total of six times by authorities in colonial and independent India.

“Manto was an honest man who wrote what he saw. He was transparent and there was no hypocrisy in his life,” said Siddiqui, who is 43.

“He thought about things in the 1940s which we fail to see or think about even today. He spoke and wrote the truth, and truth never gets old. To play him you have to be truthful too,” he added.

Siddiqui is one of Hindi cinema’s great success stories; a poor man, who from humble beginnings in a village in Uttar Pradesh state, defied the odds to make it big in Bollywood after moving to Mumbai in 2000.

By his own admission, the chances were stacked against him.

“I’m a five-foot six-inch, dark, ordinary-looking man. People didn’t imagine I would make it,” he told AFP in 2015.

But after years of playing small parts, Siddiqui achieved his breakthrough in 2012 with “Talaash”, “Gangs of Wasseypur”, “Miss Lovely” and “Bajrangi Bhaijaan”. He has not looked back.

“I spent 10 to 12 years struggling. My lowest point was to find food and survive. Now I can do the work according to my choices,” he said at his office, a collection of posters from his biggest hits hanging on a wall behind him.

Siddiqui has held his own with superstars like Shah Rukh Khan and Salman Khan and also successfully crossed over into Hollywood, appearing in the 2016 hit “Lion”.

He is considered to be one of the few actors who can straddle both commercial Bollywood and independent film genres, putting him in high demand.

After “Manto”, Siddiqui will be seen in the Netflix adaptation of Vikram Chandra’s novel “Sacred Games”. It releases on July 6 and will be the site’s first original Indian series.

He is currently shooting for what he describes as his “most difficult” character yet: divisive Mumbai politician Bal Thackeray, who died in 2012.

Thackeray founded and led the Hindu far-right Shiv Sena party, which has campaigned against Muslims and sought to bar migrant “outsiders” from Mumbai. Siddiqui is both.

“Credit goes to the family and the producer who must have realised I could do justice to this complex and difficult role,” he said.

Siddiqui will be in Cannes from May 13 to 15 before returning to India to finish shooting “Thackeray” which releases in January 2019.

He has become a fixture on la Croisette since debuting with “Gangs of Wasseypur” (2012), walking the red carpet more than half a dozen times.

A suit that Siddiqui had made by a Indian tailor for his first visit has been a feature of all of his appearances. This time, however, he is ditching it for a stylish tuxedo fashioned by one of India’s top designers, symbolic perhaps of how far he has come.

“The suit has its own story. But there should be change. We can’t hold onto the past,” said Siddiqui. JB