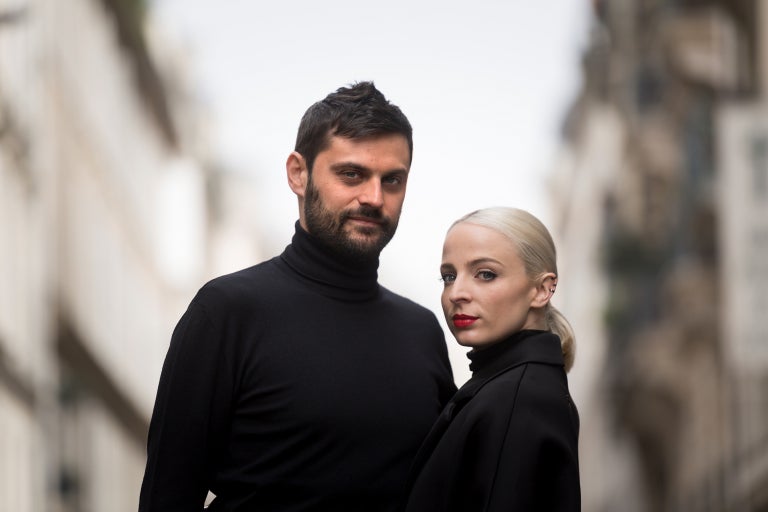 Madame Monsieur will represent France at the Eurovision with the song “Mercy”. Image: AFP via AFP Relaxnews

Mercy was born in March 2017 on the Aquarius, the vessel which rescued her Nigerian mother as she attempted the perilous crossing from Libya to seek a new life in Europe.

Like so many before, the people smugglers had little regard for their human cargo and the boat she sailed on soon began to sink.

Madame Monsieur — Emilie Satt, 29, and Jean-Karl Lucas, 35 — were rehearsing in the studio when they saw a photo of the just born Mercy on Twitter.

“We were really moved by this story; we wanted to put into music the feelings it inspired in us,” they told AFP in an interview.

Then when they were chosen to represent France at this year’s Eurovision contest in Lisbon, “We knew immediately it would be with this song.”

“The song is about human qualities such as solidarity and tolerance… It makes sense for Eurovision which was originally set up to promote European values such as peace and fairness,” the group added.

At the end of April, two journalists with France Inter found Mercy and her mother Taiwo in Sicily, in the largest refugee camp in Europe.

“We were very relieved that they were found alive and in good health. We are in constant contact with the people who are closest to them,” Jean-Karl said.

The two musicians plan setting up an association to help Mercy and her mother but this has been put on the back-burner for the moment ahead of the competition.

France last won the Eurovision song contest ages ago in 1977 when Marie Myriam sang “L’Oiseau et L’Enfant” (The Bird and the Child). But hopes are high that Madame Monsieur can do well and bookmakers have them second favorites after Israel.

There seems too to be more interest in France in this 63rd edition of Eurovision after the French entry was decided by a televised knock-out competition in January.

A couple for 10 years, married for two, they have a minimalist, Nordic fashion take with Emile’s striking blond hair offset by the black polo necks they both wear.

Top designer Jean Paul Gaultier will dress them for the May 12 competition.

“People are above all touched by Mercy but let’s say that us being together is the cherry on the cake,” says Satt, who wrote the lyrics and the melody.

Their first album, “Vu d’ici” (Seen from Here), was released last month and sounds resolutely ‘pop’ while at the same time being “a photograph of what has moved us in recent years,” Jean-Karl said.

Eurovision, with its global audience of at least 200 million people, “is a huge opportunity for us, a display case for our work we could never have expected,” says the duo. JB