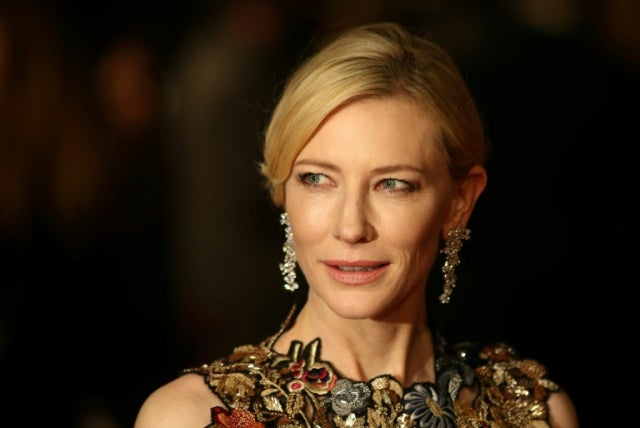 Cate Blanchett knew there was something seriously awry with the Cannes film festival when the winners of its top prize, the Palme d’Or, were gathered together to celebrate its 50th anniversary in 2014.

Among the sea of grey heads on the stage there was only one woman, Jane Campion, who had won for “The Piano” two decades earlier.

“Sometimes things have to get that bad and that stark for us to say, ‘Hang on a minute. There’s something wrong — literally — with this picture’,” the actress said this week, days before heading the jury that will chose this year’s winner.

With Cannes and the film industry still reeling from the Harvey Weinstein scandal, some saw her appointment as a quick-fix PR coup to head off critics.

The world’s top film festival, which likes to think of itself as “the movie Olympics”, has long faced criticism for its “dismal” attitude to female directors.

Only three of the 21 films in competition for the Palme d’Or are directed by women, the same number as last year.

And the festival’s decision to lift its ban on controversial Danish director Lars Von Trier, who has faced sexual harassment claims from the singer Bjork and whose company has been hit by multiple accusations, further raised eyebrows.

‘We are not going back’

But Blanchett, one of the few women in Hollywood with the clout to carry a movie single-handed, insists the film industry must change.

The double Oscar winner supports the call for “inclusion riders” or “equality clauses”, which demand diversity in casting and were championed by actress Frances McDormand at the Oscars.

She called McDormand’s speech “one of the highlights of my year” and has been been active in the Time’s Up movement set up by Hollywood stars to combat sexual harassment.

Blanchett said the riders are “a litmus test. We have nothing to lose but progress”.

If the producers do not match up to their commitments, they would have to pay a penalty that would help support female directors or other underrepresented groups.

“We are not going back to ground zero,” Blanchett told the film industry bible Variety. “We are moving onward and forward from here.

“Change is happening within the industry in a kind of positive, unstoppable way that will benefit not just women but everybody in the industry,” she added.

The Australian-born actress, who now lives in London, revealed that she had also been harassed by Weinstein in the same Variety interview.

The disgraced mogul was an “unwanted” producer on several of her films, including “Carol” and “The Talented Mr. Ripley”, she said.

Asked if he ever sexually harassed or acted inappropriately with her, she said, “Yes. I think he primarily preyed, like most predators, on the vulnerable. I mean I got a bad feeling from him…. He would often say to me, ‘We’re not friends’.”

Blanchett, 48, said she hopes that Weinstein, who is facing a raft of rape and sexual assault accusations, goes to jail. “Rape is a crime the last time I looked,” she said.

The actress, who lives near London with her husband and their four children, made her breakthrough in “Elizabeth” in 1998, playing the 16th-century British monarch with a distinctly feminist twist.

It won her a slew of awards and the first of her six Oscar nominations.

Although her career has been peppered with blockbusters such as the “Lord of the Rings” and “Hobbit” films, she built her reputation in indie movies from the crusading Irish journalist in “Veronica Guerin” to another heavily-accented (and pregnant) reporter in Wes Anderson’s “The Life Aquatic with Steve Zissou”.

Although she has never won anything at Cannes, her performance in “Carol”, where she played one half of a couple of illicit lesbian lovers, won her rave reviews there in 2014. NVG