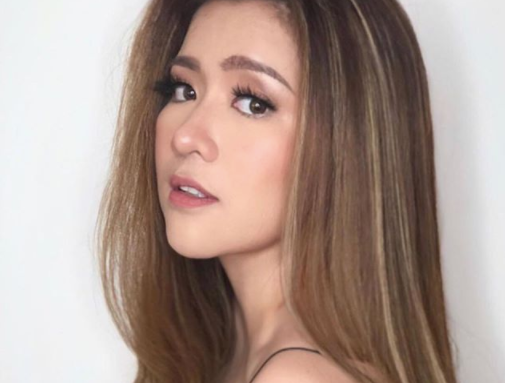 Pop princess Sarah Geronimo’s recent breakdown during her Las Vegas, Nevada concert last April 29 had stars in the showbiz industry staunchly rallying behind her for support. While her coming unhinged was an object of worry by many, boyfriend Matteo Guidicelli, on the other hand, had assured people last May 1 that girlfriend Geronimo was fine and was just tired from her #This15Me United States tour.

However, a new issue blew up in the realm of Twitter today, May 3, when Popsters — what Geronimo’s fans call themselves — accused singers Angeline Quinto and Morissette Amon of mocking and laughing at Geronimo’s breakdown.

It seems the root of the ruckus came from an alleged personal assistant who took to Facebook recently to reveal that Quinto and Amon (Amon was Geronimo’s mentee in “The Voice of the Philippines” back in 2013) were laughing at the video of Geronimo’s breakdown.

The post was written by a certain Arven Page Japos. It has since been deleted from his Facebook profile, although netizens were quick to take screenshots of his post and share them on social media.

(Morissette Amon & Angeline Quinto, you were really laughing at what happened to Sarah G? You really won’t feel the kind of fatigue she felt because you’re both just noisy. You do not have left-and-right endorsements, movies and numerous corporate guestings.) 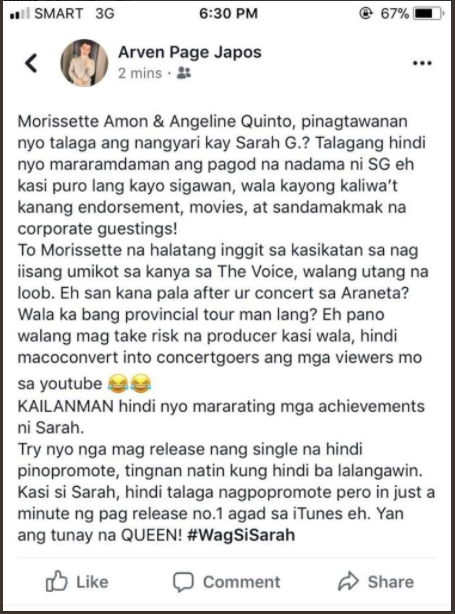 Quinto further explained that she was not initially aware of the issue about Geronimo’s breakdown, even during her appearance in “ASAP” on Sunday. She said she was only informed about it last Monday by a friend, which should mean it would have been impossible for an ABS-CBN staff to hear any reaction from her.

She also beseeched Geronimo’s fans to show her the video of an ABS-CBN staff that recorded her and Amon laughing at Geronomi’s video and calling her pabebe.

But despite Quinto’s pleas to Geronimo’s fans to show her the alleged video, none surfaced.

A few hours after her tweets, Quinto took to her Twitter once more, this time in a different tone. It appears that some of Geronimo’s fans who accused her had come forward to apologize to her. While she thanked them for the gesture, she stressed that what’s important is for everyone to think about Geronimo’s welfare. JB