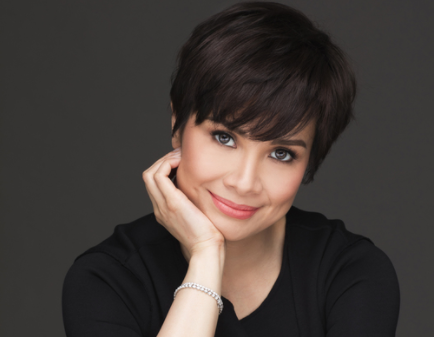 In what seems to be a growing movement, more actresses are using their influence to speak against body shaming.

Broadway star and “The Voice Philippines” coach Lea Salonga aired her side last year when she shared a blog post about the body shaming culture in the country. But this time, she has become more vocal about the issue, declaring in hashtags, “#NoToFatShaming #FatShamingIsNotAcceptable“.

“I say this as someone who, throughout my career, has been called fat to my face,” she revealed.

Netizens shared their similar experiences, and the renowned actress and singer could only sympathize.

@_AbbyBernardo lamented, “Problem is, even your own relatives are the ones body shamimg you, thinking that it would actually help. But little did (sic) they know that it really has a great impact on us emotionally.”

“It only exacerbates one’s insecurities. It’s a form of bullying, where the bully has no idea of their impact on the person’s self-esteem,” Salonga chimed in.

“They think it’s a joke and it’s ok! They don’t realized they (sic) hurting someone and someone’s self esteem… they expect me to be size 0!” @TesLex082016 vented. 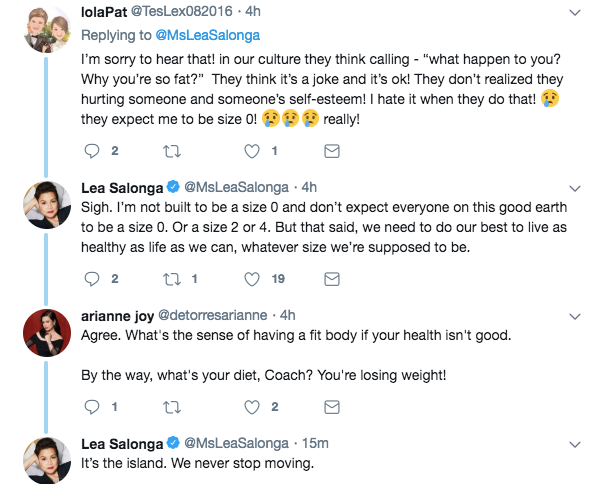 Salonga agreed, while also promoting a healthy lifestyle. “Sigh. I’m not built to be a size 0 and don’t expect everyone on this good earth to be a size 0. Or a size 2 or 4.”

“But that said, we need to do our best to live as healthy a life as we can, whatever size we’re supposed to be.”

Another follower @detorresarianne noted that Salonga had shed some pounds, to which the star replied, “It’s the island. We never stop moving.”

The actress is currently part of the Broadway cast of “Once on This Island”; perhaps the daily performances have kept her more physically active than usual.

But she proves that despite successes — including a Tony award — women continue to be pressured to be thin to appear attractive. Regardless of how empowered one can feel, body shaming comments still cut.

Stars like Iza Calzado, Bela Padilla and Gabbi Garcia have no apologies for their imperfect beach bodies, whether it’s having a bulge or stretch marks. Jessy Mendiola has admitted to feeling depressed and turning down roles out of shame over her figure.

Along with Salonga, the host of actresses speaking out now shows that women are much more than bodies to be admired. JB

Lea Salonga calls out another undisciplined fellow Filipino in airport: ‘This is why we do not progress’